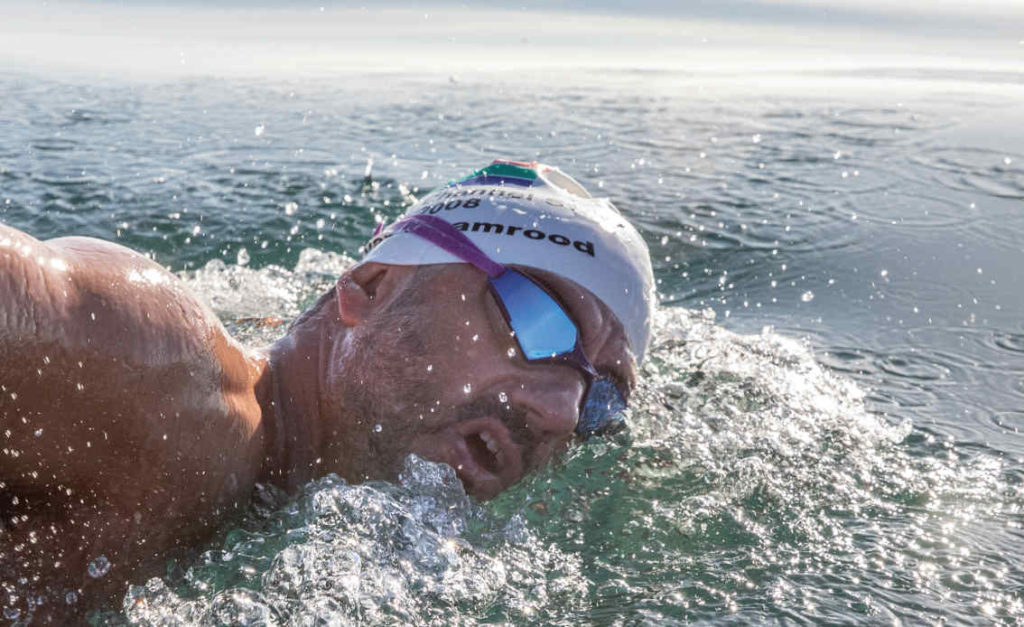 Everyone fails on their journey to success. It’s what you do with it that counts. Long-distance swimmer Ryan Stramrood says the lessons he learns conquering open water can be applied elsewhere in life.

IF YOU’VE EVER stood on the trailing tentacle of a bluebottle on the beach or had one wrap itself around you while swimming, you’ll remember recoiling from the intense pain. But the damage is done. You’ll be in for at least an hour of torment when the welts form and the itching begins.

When extreme long-distance and ice swimmer, 47-year-old Ryan Stramrood stepped off the slipway in the dark on 18 March 2021 at Miller’s Point, Simonstown, he was an hour away from encountering a colony of bluebottles stretching a few hundred metres. It would be only one of the obstacles he would face on his gruelling solo swim across False Bay, Cape Town.

His course would take him to the distinctive shark-ﬁn shaped outcrop that looms over Rooi Els near Pringle Bay. By car, it’s a spectacular drive that snakes along the rocky coast. Point to point on Stramrood’s swim route, it’s an intense 33km swim in cold waters. That’s 15 732 strokes per arm in a bay known for its capricious winds, swells, cross currents, jellyﬁsh and the greatest predators in the ocean. Great whites have returned to the bay after an absence of almost a year. Regardless of how ﬁt he was, Stramrood would need to overcome a greater threat than these opportunistic hunters – his own mental ﬁtness.

‘Eighty percent of an endurance swim is mental attitude,’ he says. ‘You have to break through the mind’s default setting – one of self-preservation and comfort. These are the limitations evolution has set for survival, but if you unlock a new mindset that says self-explore and push yourself, it makes the “impossibles” achievable.’

He’s an inspirational speaker and uses the analogy of his almost superhuman feats in the water to encourage others to push boundaries in all aspects of their lives. He has the credentials. Eight years ago, Stramrood suffered a serious angina attack and had three stents surgically inserted into his arteries. He swam himself to super-fitness but during one long-distance swim across a notoriously hostile stretch of icy sea between Scotland and Ireland, the North Channel, he was pulled out of the water by the support crew after 6.5 hours and 19.5 kilometres.

He had been well-prepared mentally and physically and had not failed any swim before, but no mindset conquers swimming induced pulmonary oedema (SIPE). The long-distance swimmer’s lungs fill with fluid and blood, a sensation described as ‘drowning from the inside’. When his support crew pulled him out of the sea, his breathing sounded like a ‘death rattle’ and the coast guards were called to assist. ‘I had failed,’ he says. ‘I was not in control and it was a deeply unfamiliar and unsettling feeling.’

It took three years for Stramrood’s confidence to return and when he stepped off the slipway earlier this year, he had pro- cessed that fear of failure. He was fit, had a strong support team and was ready for the long-planned crossing.

With nothing more than a speedo, cream for the chafe, sun- block, goggles and a swimming cap, he dived into what he calls relatively warm water (18.5°C). In the soft pre-dawn darkness, the green light on his swimming cap bobbed at a steady pace in a relatively flat ocean. After 2.5 kilometers, just as the sunrise swathed the Rooi Els mountains in a soft, titian hue and with 30.5 kilometres to go, he felt something brush down his arm… The sensation was familiar, and he knew what it was. Within two seconds the pain was going to hit and hit hard. A blue- bottle’s long tentacle had wrapped itself around his body followed by more in quick succession. He had swum into an armada of bluebottles a few hundred metres wide. ‘After the pain of seven or eight of these stings, I was jolted right out of my positive mental state. It was brutal. Physically and mentally.’

After a deep breath he started to swim again but within seconds a tentacle had stung his tongue. ‘My face was throbbing, my tongue swollen.’ The stings under his nose made his eyes water and goggles fill up. The rules were tough. No swimmer may hold onto the boat or receive any assistance from the support team. Stramrood was on his own as he repeated a mantra to himself, ‘This is a hurdle, just a hurdle.’ He describes the method as changing gears – going from automatic to manual mind control. ‘I have been stung before; it wasn’t an unknown, and I could get through the pain. The unknown was the next 30.5 kilometres. There was no question of pulling out. I just consciously said “brace yourself and harden up”.’ He put his head down and swam…

And then a strong northwesterly started to pick up from the side, not from behind, as predicted. ‘It’s exhausting. You use different muscles to stabilise yourself and a random wave catches you at the pinnacle and unceremoniously dumps you.’

At 15 kilometres from the end point, it was at its worst. ‘You have to lift your head high out of the water to breathe but I was being broadsided which meant the wave was changing my direction sometimes by up to 45° and I had to keep self-correcting.’

He had calibrated he’d reach Rooi Els in around 13 hours and there was still a long way to go. But it had taken three years to finally push the button for the False Bay swim and Stramrood was there to finish it.

He ascribes those three years of planning and preparation to ‘meticulous procrastination’. ‘I thought I had processed my North Channel failure and was talking a big game and planning it. So often everything was in place, but something always stopped me from taking the plunge both mentally and physically.’ His manager, Gill Attwood, forced him to admit to himself he was scared. Subconsciously he was being steered by fear. Still, he achieved incredible swims along the way, such as his 100th Robben Island crossing and a daunting 15km swim across the Bonificio Strait, France to Italy, to name a few. But all well within his ability. It was the start line of this mammoth challenge – 33kms across the cold, unfriendly and psychologically daunting False Bay – that he was avoiding. A challenge guaranteed to take him extremely far from any zone of comfort and with a high probability of failure.

It would take a long, hard look at the failed Irish Sea crossing to change the game as well as adopting the catchphrase that would define his path: ‘Failing forward’.

‘Failing without taking the lessons on board and embracing them, is utterly limiting,’ he says. ‘Failing forward means looking deep into the failure, the what, the why, the how. Acknowledging the impact on your mind and what positive lessons emerged, then incorporating these into the next challenge.’ Without this process, you’re unable to move forward and failure is simply that… failure.

In every major extreme-sport challenge, there is a critical turning point. For Stramrood it was 15km into the swim. Suddenly, he was not entertaining any negative thoughts, focussing instead on his pace. It was at this point that the skipper, Derrick Frazer, said ‘If you keep this up, you will beat the record.’

‘It threw me completely,’ Stramrood says, ‘I wasn’t interested in the record and didn’t want to think about it. Subconsciously it would make me go faster and derail my strategy. I am an endurance swimmer not out to make speed records.’

But the seed had been planted and he put his head down and gave it a push. The wind was dropping, and it wasn’t as wild as before. He swam the last 10 kilometres in 2 hours 37 minutes.

He saw the waves breaking against the rocks directly ahead of him and decided to swim straight despite what was going to be a difficult exit with the risk of being bashed against the rocks. After 8 hours and 39 minutes of swimming, he pulled himself out of the water, his feet firmly on the exit rock. He’d made history.

Guinness World Records officially marked his record-breaking swim, but it meant a great deal more to him. He had failed forward… spectacularly.