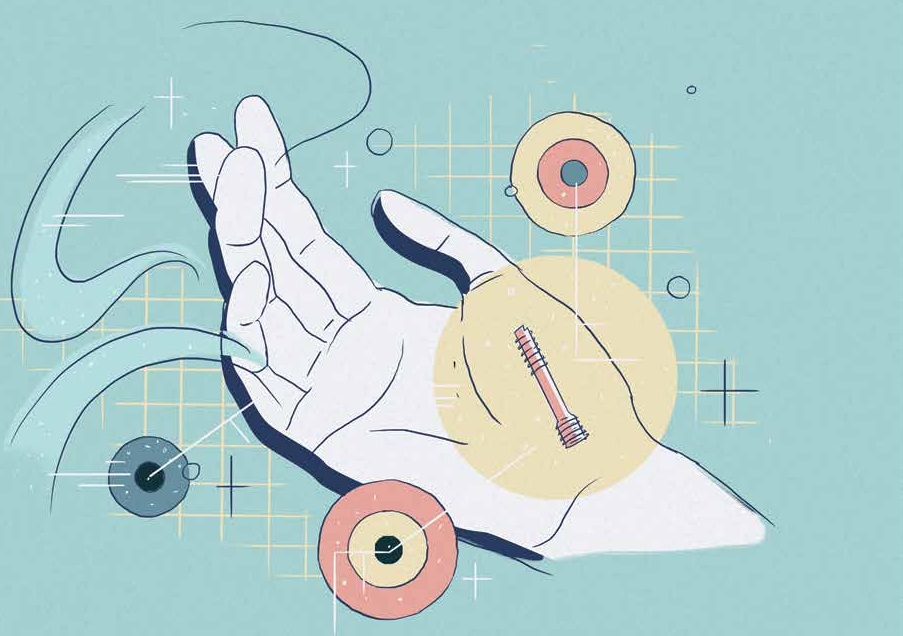 Imagine an implant that not only supports a bone while it is healing but is reintegrated into it. Imagine that the implant   is made of an element that is the natural base of our bones and is also a biological nutrient. Imagine that after a few years, radiologists studying X-rays can no longer differentiate between the original bone and the implant because it has been seamlessly assimilated into the body’s skeleton. Could that happen?

Professor Utz Claassen, CEO of German-based Syntellix AG, did more than just imagine. An indefatigable solutions-driven entrepreneur, management consultant, investor and scientist, he took a problem that researchers had been battling with for more than 100 years, and found a solution by developing a bio- absorbable, biocompatible implant.

Magnezix is the first globally approved, resorbable, orthopaedic magnesium implant in the world. It’s a quantum leap in implantology and bears testament to the work of a nebula of bright minds in bioengineering, material sciences and medicine.

Magnesium is an essential mineral in our bodies, a kind of wunderkind that activates 300 enzymes crucial for human metabolism, efficient muscle and nerve function, a strong immune system, a healthy heart, and the construction and reinforcement of bones.

Professor Claassen says, ‘In 2007, I would have been told I’m crazy.’ Perhaps that’s inevitable, as billionaire Larry Ellison, founder of Oracle said: ‘When you innovate, you’ve got to be prepared for people telling you that you are nuts.’

Despite being a brilliant idea, there was the development and extensive clinical trials to get through. Claassen says, ‘It’s been a long road to the final product and years have been spent in meticulous research and development before the right compound material was earmarked and the corresponding advanced production processes were developed.’

So what’s wrong with current implants? Quite a lot, in fact. Professor Claassen says polylactide, a natural polymer, and titanium have been the ‘go-to’ materials for implants for at least the last 50 years. The problem is that even though polylactide is resorbable it leaves, ‘hollow’ spaces in the bone – undesirable in terms of future stability. He also says that up to 30% of polylactide implants cause irritations, which is not conducive to healing.

Then there’s titanium. Light and strong, it is considered ideal for implants. ‘Not so,’ he says. The rigidity of titanium is not compatible with the natural state of bones. It may be stable and strong but it is inflexible. Unlike bones, which ‘may seem like stone but are connective tissue which is tirelessly, ambitiously alive and more animate than muscle’. And, finally, although titanium is generally considered a safe metal to use for implants, some studies have suggested that it may cause health problems, either at the  site overlying the implant or in distant organs, particularly after frictional wear.

Titanium implants also cause stress-shielding, a reduction in bone density due to reduced stress loads on bone. Understandably, this could lead to refracture later (up to 27%) and possible infection rates of up to 20%. In many cases a second surgery is needed to remove the metal implant.

Professor Claassen says, ‘Magnezix combines the advantages and stability of conventional implants and the degradation of resorbable implants (polymers) – creating an implant that morphs into natural bone through resorption, offering an ideal combination of metallic stability, near-bone elasticity and bio-absorbability. Magnesium not only accelerates healing, but has an antibacterial function and creates an osteoconductive surface that allows bone growth on the surface and down into the pores, channels or pipes.’

Preliminary studies carried out by  a  leading  research  group from the University of Shanghai in China showed that the hydrogen given off during the reabsorption process could potentially inhibit future cancers.

Tens of thousands of Magnezix implants have been used by a growing number of leading orthopaedic surgeons, sports physicians and paediatric surgeons worldwide. There is an exponential benefit to patients, hospitals, the health system, the environment and society in general.

Is Magnezix a true disruptor? Disruptive technologies are born from the need to solve a current and pertinent problem with an out-of-the-box solution. It is welcomed by the end user and feared by competitors. ‘But it  is not about the competitors,’ says Professor Claassen. ‘It’s about the patient, the  healthcare  system and the medical practitioners. No surgeon wants to use his expertise removing implants when there are more beneficial surgeries to be done.’

Plans are in place to develop and expand the range to include use in traumatology and paediatrics, with a promising future to enter additional markets such as neuro and dental surgery. It’s unsurprising that close to 90% of revenue at Syntellix AG is used in R&D.

Equally unsurprising is that Professor Claassen has been the recipient of a number of awards including the 2019 German Innovation Award in Gold, the Product of the Year category in the Sustainability Award 2018 program and Innovator of the Year in 2017 (with Syntellix AG).

There is only one thing stronger than all the armies in the world. That is an idea whose time has come. Magnezix’s time has come. It’s what we informally call  a ‘no-brainer.’