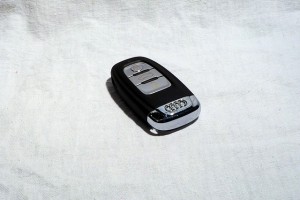 Travelling to Abu Dhabi is akin to teleporting to another planet. In another galaxy. An eclectic mix of futuristic design, technology and architecture has transformed a blank and very sandy canvas into a monument to hard-edged opulence. Let it be said, though, that there is no more comfortable way to do this intergalactic travel than prostrate in the pointy end of the aeroplane.  Which was how Audi conveyed a group of lifestyle journalists to Abu Dhabi, a pivotal new age city which constitutes 87% of the seven countries making up the United Arab Emirates.  Abu Dhabi is so the new Dubai. In fact, rumour has it that the powers-that-be watched from the wings while Dubai sprang magnificently out of the desert. Then built one better…

Why Abu Dhabi?  First, it’s hot (very, at 44 degrees) and happening… A superpower where billions and billions of dollars are the weapons of mass construction. More to the point, it is the home of the Yas Marina Circuit, which grabbed the world’s attention at the inaugural Formula One Ethiad Airways, Abu Dhabi Grand Prix in 2009.  The race track was the raison d’etre for our fleeting visit. To take the new Audi A6 through its paces following in the very famous tread tracks of such luminaries as Rubens Barrichello, Michael Schumacher and Lewis Hamilton.  Fitting, then that the Yas Marina Hotel was our base as it spans the track, offering a bird’s-eye view. The hotel is resplendent, designed to embody aesthetics associated with speed and spectacle.

And it does. At first glance it looks slightly out of place – like a spaceship that has arrived, spotted a mooring at the Marina and just… berthed. This iconic structure shouts engineering masterpiece (and braggart) with its huge steel gridshell veiling the hotel and incorporating 5000 diamond-shaped glass panels.  The optical effect is stunning, reflecting thousands of coloured lights to the surrounding desert sand and sea.

Abu Dhabi’s rapid growth is the vision and implementation of His Highness Sheikh Khalifa bin Zayed al Nahyan,  president of the UAE and ruler of Abu Dhabi. Tourism is quite clearly top of his agenda. Apart from the F1 circuit there is Ferrari World with the fastest roller-coaster in the world (at 250km/h) there is construction of an entire island – Saadyiat – or the island of happiness. Abu Dhabi is going big. A partnership with Paris means Saadyiat will house the Abu Dhabi Louvre a Guggenheim contemporary art museum and a spectacular Maritime museum – each designed by a portfolio of the world’s top (and most expensive) architects and design engineers.  It promises to be spectacular, even against the rest of Abu Dhabi, where vision, architects and engineers with a penchant for out-the-box thinking were given a blank and sandy canvas with serious, serious money as the paint brush. The word ‘budget’ does not appear to be in Sheik Kalifa’s dictionary.  At least 100 billion US dollars will be spent on development in the next five years.

One couldn’t help seeing the connection (and Audi obviously did) between the Vorsprung durch Technik epitomised in the new Audi A6 and the Abu Dhabi genesis.

Audi offered a lifestyle experience and kept their promise. They say that ‘a mind stretched by a new experience can never go back to its old dimensions…’ Well the myriad small and extraordinary, quirky and fascinating experiences in Abu Dhabi created a new frame of reference.  The Audi team provided a seamless series of encounters and incidents lubricated by sybaritic style and comfort.  Rather like the new Audi A6 – a blend of technology, luxury and comfort. Packaged perfectly.

Starting with dinner at Atmosphere on the 123rd floor of the tallest building in Dubai, Burj Khalifa. At more than 828 metres and 200 stories high it is a bit of a record-holder surpassing the height of the previous one in Taipei by 300 metres. Not, however, for those with the slightest vertigo (even the skyscrapers look Lilliputian from that height). The ear-popping blast to the top in the lift takes a mere 60 seconds (10 metres a second) and is not for the faint-hearted. It’s worth it though. Dubai at night stretches out  – a panoramic smorgasbord of colour, angles and reflections surrounded by utter – flatness.

Abu Dhabi is indeed a spectacular and Brave New World

A visit to the The Emperor’s Palace is a must.  It is a massive, gilt-edged testimony to opulence.  The future, in the form of Saadyiat island, is immortalised in display rooms with ever-increasing sized models of the new island.  Moving from the sublime to the titillating, the Emperor’s Palace also has an ATM machine that spits out, not crispy clean dollar bills, but little 24-carat gold bars in 1.5 and 10 gram sizes. Really.

Or, if that’s not your wont, gift boxes of gold coins bearing symbols such as the Kruger rand, a maple leaf, or a kangaroo. Now, when hotel guests want to exchange their cash for something a little more economically stable, they won’t have to bother with gold store clerks or business hours.  A computer inside the ATM keeps track of gold prices in real time, and prices its gold accordingly. Have people stopped believing in the world reserve currency?  Well, there is always gold bullion to go…

Moving on to the normally rather pedestrian sight of a couple taking a romantic walk on the beach at sunset– except they were on a pair of camels – their slow, ungainly gait silhouetted against the flat horizon. Some of the sights in Abu Dhabi are so bizarre it makes you wonder if there is something mind-altering in those glasses of iced water you are offered at every turn….

Although the Audi A6 experience started at OR Tambo in Johannesburg and never faltered for five days, the highlight was taking this magnificent car through its paces on the Yas Marina Circuit. It seemed we moved seamlessly from the massaging seats of the Ethiad flight to those of the A6.

We were told that Audi has a 22% share in the market in which the three German musketeers battle it out. The new A6 is a serious contender for market share and its design magnificent. Idle chatter revealed that the Audi A6 design was based on that of a sushi knife and a fencing joust (makes a nice change from Riva boats). It shows.  The body is a combination of aluminium and state-of-the art steels resulting in a structure that is light, yet rigid and very streamlined.  Shane Brand, marketing director in the UAE, described it as the ‘7th chapter of an extraordinary story of Vorsprung durch Tegniek’.  A car that ‘has status and presence’ and  where the technology is not gratuitous.  We are told that the Audi A6 is subject to the Inca test where the car is aged 12 years in 19 weeks to test the durability of parts (no big deal really– anyone who has a child in the throes of writing matric does this- sans technology).

Finally, the racing track. The Yas Marine track is unlike any other anywhere in the world and a challenge to even the most experienced driver. German architect Hermann Tilke, most notable for the Grand Prix circuit in Shanghai, has incorporated high-speed passes, varying elevations, slow corners and the longest straight in Formula 1.  Not that it deterred the group of wannabe racing drivers.

Particularly after the prepping by the Audi team.  Most importantly we were taught the control of the car depends on seating position and hand position on the steering wheel. Firstly you need to get up close and personal with the steering wheel (preferably high enough to look over and not through the steering wheel) The three no-no positions according to our very stern German instructor were, I quote: ‘The up-yours stance, (one straight arm and hand on the steering wheel) the rabbit position, clutching the top of the steering wheel hunched up and ready to bolt (think granny Agnes in her old Austin) or the classic ‘milking the cow’ when you take your hands on and off  the wheel repeatedly and well… milk it. The correct position?  Hands on either side of the wheel (quarter to three) and slightly bent for maximum control.

After extensive briefing the drivers were let loose on the circuit.  I swear I could hear the silent cheering of thousands and thousands of spectators (and fans) as I accelerated, braked, aimed for the apex and drifted out and took the ideal line (newly, nonchalantly acquired racing jargon). Soon we were negotiating the corners with aplomb and skidding round the track like seasoned pros.

The A6 incidentally has 10% more horse power and uses 11% less fuel horsepower through drag coefficient, energy conserving technology and the stop start function than predecessors. What’s not to like?

I know what I want to be when I grow up.

Then it was off to the parcour (more motoring jargon) – tests set up with cars on one track. It went something like this: Accelerate flat out for 100 metres then swerve without warning (think standard taxi manoeuvre in rush hour traffic), in what is known as the sudden lane change exercise. It’s exhilarating and perfect for excessive personalities. Then the slalom – weaving in and round and through a series of cones. The first time was rather like a round of skittles with a top score but soon we were weaving perfectly through the cones like a champion Border collie at a sheep-dog show utilising the incredible ride control of the A6. The finale was screeching to a halt between four cones to see if we could activate the anti-lock brakes. We did.

Then it was onto the skidpan… Aquaplaning at its most energetic. The ground is prepped to be as slippery as possible THEN covered with water.  The first attempt was a spectacularly elegant 360 with a pirouette at the end. It gave new meaning to the term taking the car for a spin… Supremely patient instructors taught us how to engage the Audi’s superb ride control, feathering the accelerator (don’t try this at home only in the all-wheel drive quattro) and soon we were gracefully gliding over the skid pan and round corners with the grace of a performing ice-skater. Learning to drive in the wet is an art and the Audi the perfect artist’s tool.

We also had an opportunity, after all the adrenalin of the track, to test the cruise control with stop/go function. This is not for control freaks. Like a meek line of remote-controlled lambs we sat in the driver’s seats – only steering. The car accelerates and brakes on its own, mimicking the car in front and keeping the correct distance.  Liberating feet-free driving. Great if you just want to zone out in the rush hour traffic on the way home (actually you can even paint your toenails while you stop/start  remotely through suburbia). There are four different distances you can set from the car in front but my money’s on the fact that no matter how small the distance is – a taxi will find a way to cut in…

The day’s driving was brought to a gentle close with a demonstration of the park assist. First the car identifies the parking space then takes you in – parallel or reverse.  Watching the steering wheel turning to its own tune is a bit like watching mesmerised a session glassy glassy.  Being of Teutonic design the parking had to be perfect.  The car makes no fewer than adjustments to make sure the position is exact – 25cm on either side.  German precision at its most endearing.

Audi set out to showcase the new A6 in the most relevant and exciting environment. The fit was perfect.  The new age, technology, the excitement of a supercity rising out of the sand and of course the world famous race track.  Like Abu Dhabi, the A6 is indeed hot and happening…