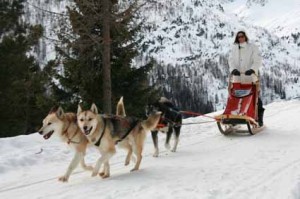 It’s minus 10 degrees.  The snow is soft, pristine and the air bitterly cold. The Huskies are brought out from their personalised Lillipution houses – one by one, ethereal puffs of warm breath rising into the cold air. The handlers hold the dogs’ collars tightly, lifting their front legs slightly off the ground. They do a comical kangaroo hop on strong back legs to the waiting sleds. Eyes wild, they twist their heads, craning, coiled-spring alert.  In a rapid show of respect from the pack, the narrow path is cleared as each dog is frog-hopped past.  Speedy… Luna… Mti… Popil…Amber…Nanuk….  Lucky… Tumi…Fire, and last, his white chest swathed casually in a thick black coat … Sky.

Lorenzo Tilli, Musher extraordinaire and warden of Husky Village in Bormio, Italy is giving his prep talk.  Despite the, ‘Mush-mush of movies,’ he says,  ‘it is a command rarely used.”   ‘IKE, is the command to ‘go’  (detonate would be a more accurate description).  Lorenzo’s survival guide is brief: “IKE’ – Go! (Zero to fast, in a flash of paws) HUP – speed it up a little (an entirely unnecessary command we discover) and the life raft of commands – WHOAAHHHH – stop.  This trio of commands is followed by the rather incidental lesson on how to drive a sled… As Lorenzo explains to the intrepid group that the term Mushing is from the French derivative marche meaning to go or run and describes any sport or transport by dogs, the dogs jostle and hustle for position in the hierarchy as they are harnessed. There is a frenzy of yipping, barking and swallowed howls as they fiddle and fuss. The huskies display all the patience of a grade one class waiting to be dismissed at recess.

But strapped in, they morph astonishingly into puppy dogs – responding to a cautious approach by rolling beguilingly on their backs for a tickle. They turn inside out to be scratched behind the ears, gently whiffling your hand closer – burying their heads playfully in the snow then emerging  trailing snowflakes and nudging cheekily for more attention.   Their adoring gaze doesn’t falter – once.  And without exception, the group of amateur ‘Mushers’ fall irrevocably in love with their four-legged transport. 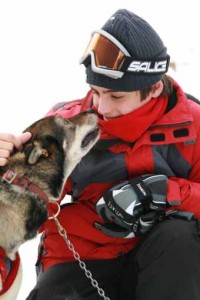 Finally all the teams are ready and suddenly they are up and working dogs again, taut in anticipation. They ‘yip yip’ amongst each other, trembling latent energy and impatience.  We step tentatively onto the wooden runners of our sleds, aware of the potential velocity reigned in and quivering in front of us.  The ‘brake’ is a heavy rubber doormat, used like a piano pedal – gently, but harmoniously with the movement of the sled.  But for the moment, it is being pushed desperately into the snow.  There is an option for the less adventurous – nestling, possum-like in pouch into the front of the sleigh. A position from which the experience of driving a sled can be enjoyed vicariously.

Despite the tentative ‘Ike…’ from  the newbie mushers. … the dogs take up the last bits of slack in earnest, their hind legs extended into the soft snow, muscles straining. As one, they take off – released from some invisible starting gate.  The mush, as they say,  is on. The wheeler dog, which is closest to the sled, turns briefly to check on his precious cargo.  His eyes are startling non-identical twins. One, a near-transparent blue, seems to do a clinical safety check while the other, a warm hazel, almost camouflaged against the thick dark fur, is softer.

The dogs are slight, yet athletic and adorable.  Instinct and training mingles with an obvious love of the task as they slide the sled effortlessly across the creamy snow of the forest floor. The echo of silence is suspended, broken only by the snow clicking off the dog’s paws, the occasional tinkle of harnesses and scrape of the sled on the snow.  Mesmerized by the icing-sugar box mountains, the world is reduced to this and your rapid heart beat.

A rather handy ‘add on’ to the sled is the ‘handbrake.’  Rudimentary but effective, it is a wooden bar upon which you are required to leap, both feet simultaneously and dexterously which  releases a set of grapple hooks into the snow. The effect is instantaneous.  Which is apparently a good thing when a sled stops abruptly in front of you. The dogs need to keep a distance of 20 metre between them otherwise they will fight. Why one wonders?  Italian shrug from Lorenzo.  ‘Just because the other dog is there.’  And when a female is on heat, he tells us, she obviously cannot work.  In charming, broken English, he explains how it would,  “cause the boys to chaos.”

Husky Village is Lorenzo’s brain child and passion.  Two years ago after travelling thousands of kilometres across the Northern wastes of Alaska with his huskies learning all he could from the masters, he came to Italy.  Armed with 6 huskies with different genealogy and a brilliant idea.  Mother Nature obligingly stepped in to make it a team of 48 huskies – or more accurately – canine children. Watching Lorenzo handle the dogs is watching a theatre of mutual admiration. Before choosing dogs for the mush, he walks through the cacophony of barking, yipping and rattling like a well-respected teacher, his body language gently commanding, communicating.  He leaves a trail of smitten silence – the eyes of 48 Alaskan Huskies boring longingly into his back.  Apart from the love though, Huskies need special care and looking after this canine family is not for the fiscally challenged.  The team takes 15 000 euro of food, dieticians, vets and carers a year.

The Alaskan Husky, like its cousin the Border Collie, is defined by the ability to work. They are bred for stamina, speed, strength and endurance and can run up to 200km a day. But because they are not as hardy as their Siberian cousins, they rather endearingly need to wear coats and dog booties in really cold weather (much colder than minus ten). The temperament of the dog will determine its position in the team. Lead dogs are the GPS, chosen for their intelligence, initiative, common sense, and the ability to find a trail in bad conditions.  And it would come as no surprise to the Suffragette-sympathetic, to learn that the lead dog is usually female… Driving a sled around a corner is not for the faint hearted.  It involves ‘disembarking’  – an exercise which has all the dignity of a clip from Funny Movie 3.  If the sled goes left you jump off right.  Yes. Off the runners which by logical deduction continue to move with the sled and without your body weight.  Ergo, faster.  So, picture the scene.  The sleigh is moving, you leap off, run like hell to catch up, losing ground every second and then like a seasoned (and desperate) athlete leap onto it again – safely and gracefully.

Well, theoretically anyway. Sledding is an out-of-the-box experience. It’s unfamiliar.  And exhilarating. Relinquishing control to the harnessed whim of a trio of pooches and an aerodynamic sled is utterly liberating. The simmering cauldron of nerves, adrenaline and pure pleasure eventually bubbles over into bursts of delighted laughter along the track. Time is suspended and all is well in the world… Until, suddenly, the sled lurches as the dogs avoid an obstacle – your wild eyes catch the reassuring backward glance of the wheeler as you lean like you have never leant before. The sled stabilizes and the ‘blow torch’ blue eye of the Wheeler is reassuringly back on the track.  Your destiny is in the perfectly synchronised lope of the dogs and the invisible bond between man and dog. The indomitable spirit of sled dogs is legendary – less heralded but totally understandable is the palpable bond between the huskies and the humans. A bond which is described by an opponent of the young Norwegian, Leonhard Seppala, who won the treacherous All Alaska race in 1917 with his team of Siberian Huskies. He says,  “It didn’t even look like he was driving the dogs, but I have never seen dogs pull so hard. Something was going on between him and his huskies. I will never be able to explain it.  Something supernatural, some kind of hypnotism.”

The temperature is minus ten degrees.  Florets of snow decorate the coats, tails and ears of the huskies, their pawprints are frozen into the snow. The  indelible imprints of the warm and willing hearts of  man’s best friend. 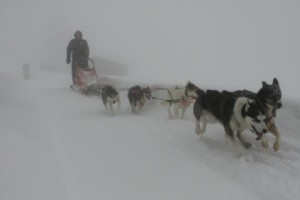