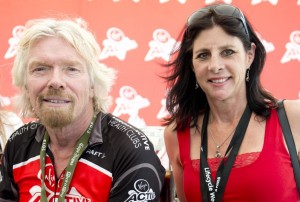 This is what Virgin Group founder Sir Richard Branson said at the finish of the Cycle Tour after taking 5 hours and 33 minutes to complete the 109 km route.  It was a great time for Branson because by his own admission he had ‘not been on a bicycle since he was ten years old’. He also said he was ‘relieved to have tried the bike the day before, when he learnt how to use the gears at the Ride with Richard charity event for The Branson Centre of Entrepreneurship and JAG Foundation

Branson keeps fit by surfing, swimming, playing tennis and, of course, going to the Virgin Active health club in the UK, but the race was a challenge.  “I am quite fit, so I thought I would give it a go” he said with his typical broad smile. Asked what it was like to ride on a tiny saddle, balanced on two thin wheels for 109 kilometres he said, “I was fortunate to be with a very experienced group of riders from Virgin Active who guided me through the race and the crowd and spectators were incredible! Their support and cheering and encouragement was what got me round the route.”

He says he remembers the crowds at the London Marathon in which he participated last year, saying their cheering and encouragement “just sweeps you on”.  When asked how tough the Cycle Tour was compared to the London Marathon – he said the marathon was ‘tougher’ but that if he’d been asked that question half way up Suikerbossie, his answer may have been different!  He put his success down to the spectators for their support and ‘taking him through’.

Considering the Cycle Tour has the most panoramic views in Cape Town the obvious question was if Branson enjoyed the spectacular scenery…” He said, “I was too busy watching my feet!  Although I had glimpses of the scenery, my concentration was on the pedals and keeping going.” And keep going he did – even ‘Sukkel Suikerbossie’ didn’t defeat him.  He arrived for a short pit stop at the Virgin Active station encouraged and given a gentle push by a host of Virgin angels, there to help riders who found the 2km hill just too much.

Branson said the most amazing thing about the ride was that “the bike had more than two gears and they worked, a far cry from the one he rode 10 years ago!”  He said, “The angels were a godsend and the encouragement from our staff along Suikerbossie was phenomenal.”  He added that he was pleased to learn that well over 15 000 of the riders participating in the event were “Virgin Active members.”

Despite Richard’s reputation for ‘being prepared to try anything once’ he did recommend that anyone game to attempt the Cycle Tour next year “should consider riding a bike beforehand and training for the event!” 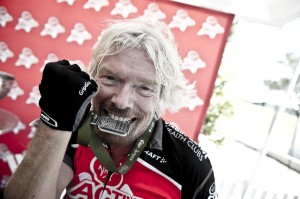