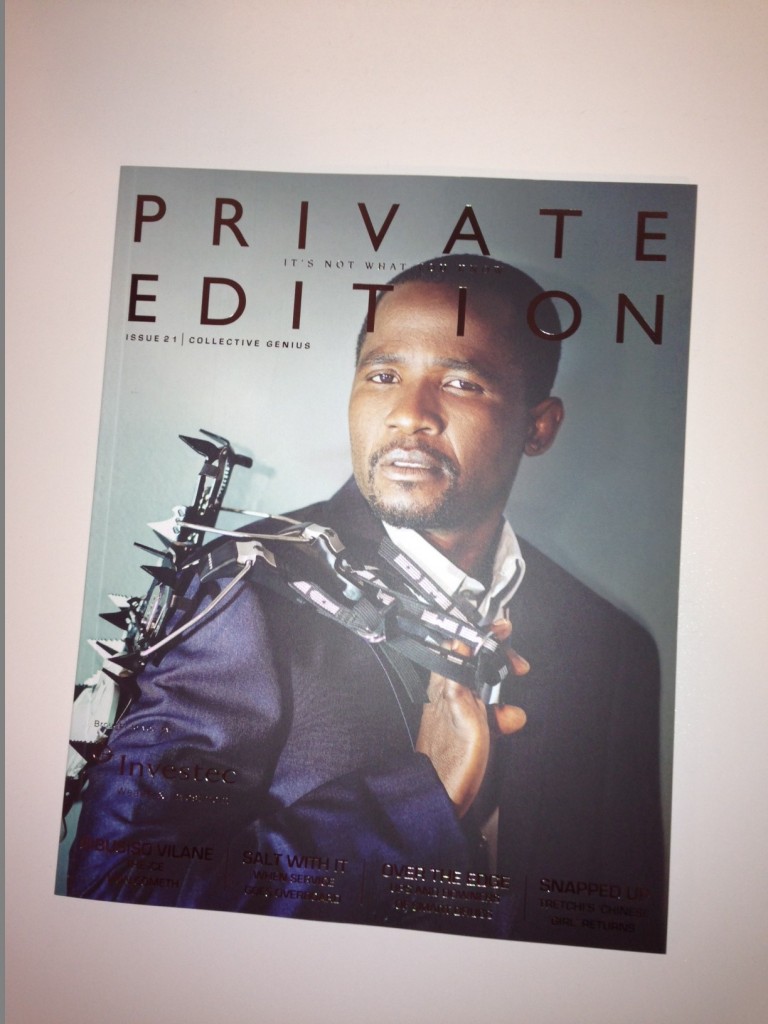 10 000m of fixed rope, ladders and a climbing Sherpa are all the help you’ll get if you want to conquer Everest. The rest is mindset, physical endurance and a touch of madness. Sibusiso Vilane has all three.

Sixty years since Sir Edmund Hillary and Tenzing Norgay made history by summiting Everest and 10 years since Sibusiso Vilane stood on top of the world, he is planning his third summit.  Not only to celebrate his high altitude life but as a champion for the 46664 Participate for Good Library initiative.  Sibusiso, who says his life transformed completely when he made his historical summit, plans to pay the philanthropy he enjoyed, forward and raise funds for at least 10 libraries for schools in South Africa.

Sibusiso’s dream was to be the first black man to climb 8848 metres to the top of the world.  So he did. Twice. After summiting from the first south side in 2003, he tackled the more treacherous north side in 2005. Not satisfied he walked unaided to the South Pole and the North Pole which means he has the elite ‘three poles adventurers’ trophy under his belt: The top of the world, the bottom of the world and the highest peak.

Since 1953, only 4000 climbers (including Sherpa’s multiple summits) have reached the top of the world.  Over 300 people have died trying. Sibusiso came very, very close. What lay between Sibusiso and almost certain death was $150 – $100 dollars more than he had.

On 3 June 2005 Sibusiso had summited Everest for the second time from the North side. He was on his way down from 8000m, alone, out of oxygen and water. The temperature was -30 degrees C and dropping, the sun was setting, the wind howling like a banshee.  Dehydrated and struggling to breathe, Sibusiso dragged his pack as he crawled down the mountain.  “The music of the devil was sounding very clear,” he says.

“But after about 200 metres, my coughing became so intense I had to sit down to catch my breath and started to fall asleep.  It takes two minutes in those temperatures to freeze.”  He realised that he was in the exact position he had seen so many dead climbers – frozen in time – and still clipped to the ropes. Too weak even to crawl, he continued the only way he could.  Like a child, paddling on his bottom, he slid down the vertical slope.  He was alone, frightened and knew if the sun set he was a dead man.

The first time he had seen Everest or Sagarmatha, Nepalese for Goddess of the sky there was a cloud veiling her summit. “The mountains never spoke loudly, but silently and to me Everest said, “Sibusisio you are welcome to stand at the top.

“But now the mountain was beckoning me to lie with her forever. She had so much energy, felt so alive and as if she was going to consume me like so many other climbers.”

Suddenly he heard the sound of singing and like an angel, a lone Sherpa appeared.  Sibusiso asked if he could help carry his pack down to Camp Two (7900m) for $50. “$150,” said the Sherpa as calmly as if bartering at an Indian market.  An offer to pay when they reached Advanced Base Camp was met with a calm “No. Cash now.”  Sibusiso didn’t have it. The Sherpa looked at him calmly turned and left and vanished over the ridge. A deep sense of betrayal and disbelief was followed by a bout of bitter weeping. Sibusiso, had been left by his three team mates, expedition leader and the Sherpas in the race to get down after summiting – and now he was being left for dead.

Enough to break even the ‘Lion’ the sobriquet given to him by fellow climbers? We asked what would break him mentally and physically? Sibusiso says with equal humility and conviction, “This is my heartfelt answer: Nothing but myself!  And I can only do that by self-limiting, by not entertaining that the impossible does exist in my mind, as long as I believe, then nothing can break me.”  His shock at the callous abandonment was soon replaced by the realisation that he could not rely on anyone –but himself.

But the sun had set, he was dehydrated, short of oxygen and freezing.  Half way between the two camps in no man’s land. He started his desperate slide down the mountain again. When he heard his name echoing in the twilight, he thought it was the ghost of Mallory or Irvine.

Then the dark figure of Mingma, the Sherpa who was supposed to summit with fellow South African Mark Campbell – in the same team but in a separate summit attempt – appeared next to him.  Mingma had sacrificed his chance to summit and come down, carrying life saving water and oxygen. Mark was prepared to summit without his personal climbing Sherpa.

Sibusiso’s story so far is not likely to have anyone rushing off to attempt the 8848 summit. So why do so many people want to climb The Goddess of the Sky? Historian, Walt Unsworth who compiled 800 pages of Everest history says: “There are men for whom the unattainable has a special attraction. Usually they are not experts. Their ambitions and fantasies are strong enough to brush aside the doubts which more cautious men might have. Determination and faith are their strongest weapons. At best such men are regarded as eccentric; at worst, mad.”

No doubt George Mallory was the latter.  In 1924, he and Irvine attempted to summit in Norfolk jackets, knickerbockers and puttees, carrying 60 tins of quail in foie gras and 48 bottles of champagne, Montebello 1915. They were determined to succeed at any cost – in Mallory’s and Irvine’s case, their lives.

So is it madness that makes a young black man, who grew up in extreme poverty and was a goat herder from the age of four, aspire to climb the highest mountain in the world?  Clinton Gahwiler a psychologist from the Performing Mind and Sports Science Institute of South Africa says, “In fact Sibusiso has a healthy focus. Trying to push and improve oneself. “Unfortunately in more traditional competitive sports this element is drowned out by the overwhelming desire to overcome the opponent and ironically this is the biggest obstacle to accessing human potential.  This opposed to welcoming the obstacles the opponent puts in one’s way as it brings out more in you.”

He does caution that there is a fine line between useful, positive self-belief and denial.  In Sibusiso’s case Clinton believes that he has learned to distinguish between appropriate and inappropriate fears and let go of the latter.  He has healthy ambition.

For a boy who had to go barefoot and wore little more than a loin cloth in his young years and only started school at the age of ten, the impossible does not exist in his mind including finding the $60 000 (Debbie, Les put this in red  which probably meant she was querying but it is correct) to summit the most challenging climb in the world. During his second Everest summit he carried Nelson Mandela’s book The Long Walk to Freedom . “Symbolic,” he says, “of shaking off the shackles of poverty” which had been his shadow all his life.  It is unsurprising that he is now in demand as a motivational speaker around the country.

“It is not natural for a black person to want to climb a mountain… On all of my climbs and particularly Everest, I was the only one and enough of a curiosity for all the kids in the villages to stare at me and the Sherpas to be confused. The up side was that I met so many people – mostly inquisitive as to why I was there.”

Apart from his absolute determination to change his life it was not without the generosity of family, employers and acquaintances who gave Sibusiso the first leg up Everest. His stepfather worked night shifts to pay for his schooling in Swaziland and the Canadian couple who he gardened for over weekends, agreed to pay for him to complete his O levels in Swaziland. But the life changing moment was when he offered to guide an Englishman, John Doble at the Malolotja Nature Reserve where he was a game ranger.  It was during these walks that Doble told Sibusiso that he climbed ‘easily and well’ and tentatively suggested he climb Everest.  John invited him to climb the 3000 m Cathedral Peak in the Drakensberg.  Eventually he was sponsored to have a test run on Kilimanjaro.

He must be the only person to leave on an expedition to climb the highest point in Africa on public transport with a family of four young kids in tow. The bus dropped him a few kilometres from the airport and he had to walk towing his bulky expedition bags until eventually a police van stopped and gave him a lift.

When Sibusiso arrived for his first attempt at Everest he was proudly wearing his game ranger uniform, army green trekking pants, combat boots and a light fleecy zip up top – not far off from the Norfolk jackets, knickerbockers and puttees of Mallory. Suitable for the mild climate of Nelspruit but not for the 8848m he was going to summit.   “I could feel the breeze through my skin and we were still at base camp!  I could see the other climbers saw me as a joke.”
Sibusiso was only attempting the summit because of the personal contribution and efforts of John Doble in raising the sponsorship for the trip. Money was tight and he only had the basics. A hired down jacket and suit from Jagged Globe was the hopelessly inadequate ‘essential gear’ he had. There was a lot he had to get used to including crampons.  “I’m sure I looked like a baby giraffe learning to walk with double plastic boots them as well as the other gear. I had to watch and learn.”

Mentally, he was far better prepared.  “I read as many books on Everest I could including Into Thin Air. “I imagined the mountain and climbing, past places where people had died, I never imagined myself falling or turning back – I visualised myself on the ice and snow and in my mind I had already climbed Everest.”

Which is why when he found himself alone, freezing and short of oxygen he didn’t give up.

Where to now for someone who has climbed both faces of Everest, pulled a 140kg sled to the South Pole, survived the 1110 km walk to the North Pole completed the Dusi Canoe Marathon, the Comrades and of course the other six summits which make up the seven summits of the world.

He has conceded his plans to summit again to relive the moment and raise funds for charity.  But there’s something else and he’s not saying.  “I have a plan, he says. …”  Then he uncharacteristically clams up. He looks pensive for a while and then breaks into an engaging smile.  “Maybe that will break me.’

And we’ll only know when he knows. 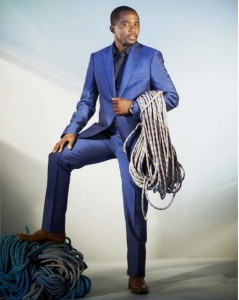 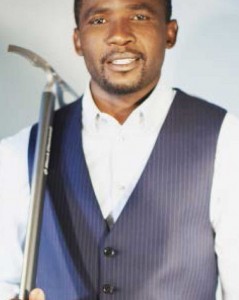