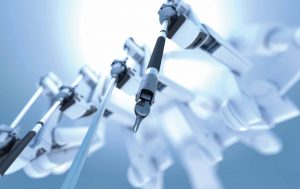 Surgeons are now using miniaturised mechanical instruments and magnified 3D visuals to perform intricate surgery. Health writer Kathy Malherbe had the opportunity to witness a three-hour operation and describes it as a quantum leap in minimally invasive surgery.

Observing a three-hour robotic surgery feels a little like Alice in Wonderland stepping into a fantasy world populated by a large anthropomorphic creatures. Robotic surgery is not one miracle but a succession of them – a combination of technology, technique, precision and surgical skill. The US manufacturer, Intuitive Surgical, calls it the da Vinci Si HD robotic system and describe it as ‘a sophisticated laparoscopic surgical tool that consists of a surgeon’s console and a patient-side cart with four interactive robotic arms controlled from the console’.

With apologies to the copywriter at Intuitive Surgical, this description is understated and self-effacing. It is not hyperbolic to say the robotic system is the future of urological (and other) surgery, and nothing short of mind-blowing.

The robot is quite aptly named after Leonardo da Vinci, who studied anatomy originally as part of his training as an artist and performed dissections before he progressed to mechanical engineering. His study of anatomy led to the design of the first robot known in history.

Once the patient is in theatre, they are anaesthetised and prepped for surgery. This takes longer than for conventional surgery – about 45 minutes. The patient is ‘wrapped in cotton wool’ to protect pressure areas because they’ll have to lie in a difficult position for quite a long time. The laparoscopic ports are placed manually inside the abdominal cavity, giving the surgeons access to the pelvic cavity. Despite its ungainly look, the precise connection is absolutely vital in ensuring that this micro-surgery is safe and efficient.

When Dr Bruwer requests an instrument or swab from his console, Dr Van Vollenhoven sends it down one of the ports and the handover takes place with absolute precision inside the pelvic area.

One look through the eyepiece and you can see why robotic surgery is so successful. The computer analyses and constructs 3-D footage, giving the surgeon superb vision and depth perception. ‘The magnification is 10x, so you can see even the smallest veins and arteries long before you’d see them with the naked eye,’ says Dr Bruwer.

As one surgeon said, ‘It’s as if I’ve miniaturised my body and gone inside the patient.’

Dr Bruwer guides the instruments, lifting the patient’s bladder, cutting through the urethra and isolating and cutting out the cancerous prostate. The assisting surgeon sends a plastic bag down one of the ports into which the enlarged prostate is placed. Dr Bruwer then begins the delicate process of connecting the bladder with the urethra. You can’t help holding your breath as they are slowly pulled together with stitches until the intricate connection is made. It’s a bit like watching an intricate rendezvous between two aircraft to refuel one of them mid-air.

Once the surgery is complete, the robot is disconnected and the ports removed. The plastic bag containing the prostate is then removed through a port in the navel and sent to pathology.

It is multitasking of the highest order and Dr Bruwer operates the robot with the dexterity of a teenager playing Age of Empires or Star Wars: Battlefront on an Xbox

The da Vinci is not only a highly sophisticated piece of machinery but also has definite advantages over open surgery. Dr bruwer says, ‘Since 2007, significant improvements have been made in reducing the length of hospital stay, blood loss, time to full activity, and the reduction of time with a catheter from 20 to seven days. Not only is there a far higher incidence of the return of erectile function, but studies in 2017 have also proven it is a better cancer control for high-grade disease.’

The recovery time is phenomenal indeed. This particular patient was discharged the day after the procedure.

No wonder, then, that Dr bruwer refers to this surgery as ‘the cutting edge of treatment when it comes to significant, aggressive prostate cancer – now, and for many years to come’.

The robot may be a technological masterpiece but without the skill of the surgeon it has no value. Training involves 50 to 60 hours on a simulator, followed by practical training in Belgium. The first 12 procedures have to be guided by a ‘proctor’ – someone who is accredited to teach robotic surgery – and the first 25 cases by a robotic- accredited assistant urologist. Perhaps this explains why there are so few hospitals and surgeons using the robot: it is a hard-earned skill.

‘Utilising this advanced technology, our surgeons are able to perform a growing number of complex urological, gynecological, cardiothoracic and general surgical procedures,’ says Dr Bruwer. ‘Most of my patients ask for this surgery, but some medical aids refuse to pay. It is the preferred surgery worldwide and we plan to operate on some state patients at no cost next year. Many patients come to me of their own accord once diagnosed or ask to be referred by their urologist.’

The robot costs about R23 million so one would expect the cost of surgery to be exorbitant. In fact, at R155 000 it isn’t much more than an open procedure, which costs about R120 000). Without a doubt money well spent. 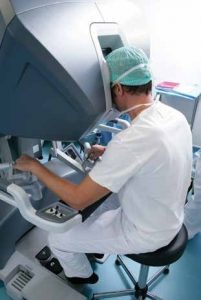 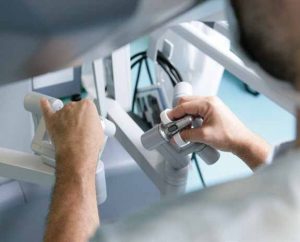 The surgeon uses miniaturised surgical instruments that fit through a series of 8mm incisions.

The robot has mechanical wrists that bend and turn to mimic the movements of surgeon and urologist Dr Gawie Bruwer’s hands during surgery. Mounted on three of the robotic arms, the instruments allow the surgeon maximum range of motion and precision.

Dr Bruwer is able to operate all four arms of the da Vinci while looking at a stereoscopic high-definition monitor that gives him a better, more detailed 3-D view of the operating site than the human eye could provide.

As he controls it, the robot operates on the patient, translating the surgeon’s hand movements into smaller, more precise actions.

Three of the arms are for tools that hold objects and can be interchanged with various operating instruments as well as a high-intensity 3-D camera. The tips of the arms have full 360° movement capabilities, with 7° of freedom and 540° of rotation.

There are also foot controls used to manoeuvre the camera arm, switch to the fourth arm, clutch the arms when ‘hand controls’ need adjusting and activate the energy instruments. It is multitasking of the highest order, and Dr Bruwer operates it with the dexterity of a pathological gamer playing Age of Empires or Star Wars battlefront on an Xbox. The difference is there is no room for error or novices in this delicate surgery.

‘It’s not something where you just pick up the technique and off you go,’

Dr Bruwer points out. Urologist Dr Pierre van Vollenhoven, who assisted Dr Bruwer in this procedure, agrees: ‘It’s a massive challenge to get to a place where you can start operating with the robot. It’s a huge learning curve.’