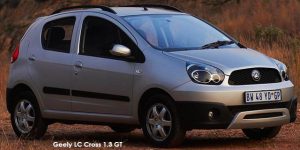 It’s testimony to Geely’s tenacity that the launch of its LC Cross actually happened. The day before the event the truck carrying the cars was side-swiped and jack-knifed 60km from the venue in Hoedspruit. Of the 11 cars aboard, seven were badly damaged and only four were able to be used (bearing war wounds).

A hastily executed Plan B had seven brand-new cars on the road from Midrand, just north of Johannesburg, at midnight and arrive an hour before the journalists at the newly opened Kapama game lodge outside Hoedspruit.

The accident and near non-launch was a baptism of fire for Henry Messtry only 24 hours into his new position as MD of Geely SA. He introduced the LC Cross as an expansion of the local line-up based on the familiar LC hatchback – “economical, dependable, affordable and filling a gap in the entry-level market”.

Dr Lin Zang, general manager of Chinese parent Geely International, explained how Geely was concentrating on emerging markets. The challenge was the fact that Geely cars were developed to be left-hand drive and had to be adapted– so took slightly longer to reach our market.

The LC Cross (called the Panda in other markets, a name already taken in SA, in honour of China’s most cuddly animal) is Geely’s answer to an entry level market that is growing exponentially and ticks the boxes “funky” and “affordable”.

At around R100 000 a pop, the LC Cross is definitely going to catch the eye and appeal to the pocket of South Africans faced with shrinking budgets but a yearning for a taste of the previously out-of-reach SUV market.

So how does the LC Cross rate? Although the Cross has moved away from the “panda” look with the smiley-face grille replaced by a more masculine honeycomb – it’s still damn cute.

The shape is modelled on the Geely LC five-door hatch but with a little hair on its chin – a sort of macho baby bear, emulating the more rugged SUV appearance. It’s a resounding success. Sporty and robust, still endearing. And if you’re thinking cute is tiny – think again.

The cabin is surprisingly spacious in the front and although it has been said that you sit “on” the seats not “in” them, I like it. It gives you the feeling that you’re higher off the ground and in the volume of a real SUV. The back is not as spacious and I doubt anyone over 1.8m would fit in comfortably.

The 180mm ground clearance and improved visibility of the LC Cross made it perfect for the gravel roads of the Kapama Game Lodge where the convoy snaked through the Lowveld and past giraffe, teeny little warthogs, antelope and jackals as we put the little Cross through its paces.

It reaches a top speed of 165km/h (not to be tested in this hallowed conservation area) but on the open road. Here we could experience what its maker calls “Engenuity”’ in the form of a modern twin-cam 1.3-litre, quad-valve engine capable of 63kW at 6000rpm and 110Nm at 5200 rpm.

I wouldn’t describe the car a gutsy but it gets to a respectable speed in its own time although on an incline you do need to change down to fourth; let’s just say the power is more than adequate for what it is: a funky, but compact and economical, small car.

The LC Cross is no knock-off Chinese product. It’s a unique vehicle in the South African market – conceptualised, designed and manufactured by the Chinese.

And if its cheeky pay-off line – ‘Bring it On!’ on the back of the vehicle – sounds like a challenge… Judging by Geely’s confidence about the products, it is…

…with a 36-month or 100 000km factory mechanical warranty and AA Roadside Assistance across the range.