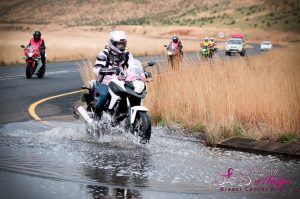 It’s way more than the usual concept of a bikers’ Sunday breakfast run. Speed and cornering won’t be very important but patience, guidance and saving lives will.

The 2012 Journey of Hope IS a bike ride but not by a bunch of heavies in leather, though some of the good ones generally tag along as escorts; the primary riders will be 16 breast-cancer survivors carrying a message of hope to women across (this time) kwaZulu-Natal that breast cancer needn’t kill.

The brave 16 will cover 1800km from October 6-14 riding and reaching out to rural communities by riding motorcycles from Pretoria to Bethlehem and focusing on the Eastern Free State then heading through the KZN Midlands and ending at uShaka Marine World in Durban.

At each of the many stops on what has become an annual ride in various parts of South Africa the community will be told how to identify and then treat breast cancer; speakers will de-mystify the disease while pointing out that not only middle-aged women are susceptible. Even men can get it…

Ride spokesperson Kathy Malherbe (pictured), herself a breast-cancer survivor (and biker), explained that the ride was also, for the riders, a personal path of growth and healing.

Honda is the ride’s official motorcycle sponsor and responsible for training and road support. John Mitchell, Honda’s product manager, said: “We are delighted to endorse the Journey of Hope campaign, and are glad to be a part of this wonderful initiative.’ 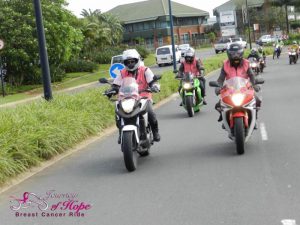 Volunteers from Think! Bike, another non-profit organisation, also in year five of riding with and supporting the Journey of Hope, is providing rider training, support and marshalling. Shoprite is providing food and a mobile kitchen and volunteers to run it to feed each community as the ride passes through.

Malherbe said: “Breast cancer is the most common cancer in women worldwide. In 2011 the World Health Organisation reported that it killed more than 500 000 in 2004 and nearly 70% of all breast cancer deaths are in developing countries such as South Africa.

“Raising awareness, as our rides try to do, has become a global concern. We believe ‘education is power’. If we can give the gift of education to one person and it saves their life we have achieved what we set out ” 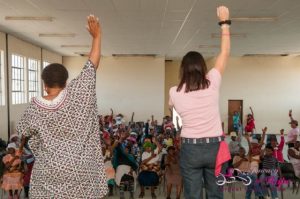 The following is from Malherbe’s blog on the 2011 Ride of Hope:

‘It is an emotional ride. Sometimes it was overwhelming as we climbed on our Hondas, to slowly leave town, traffic cops’ sirens blasting and lights flashing, and hit the open road. The jumble of emotions was slowly soothed by the rhythm of the bike, the feel of the wind and the sense of camaraderie among the riders and support team.

‘As we rode off we were always aware that WE were the lucky ones – we may have survived breast cancer but there are people who cope with that and so much more. We look forward to taking to the road again and spreading the message of Hope.’