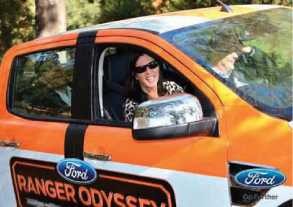 All I had done was request to swop places and try my hand behind the wheel of the Ford Ranger. Over an obstacle course. Reasonable, I thought. Perhaps it had something to do with the fact that I ‘d described myself as an off-road virgin and a pretty nervous one at that.

OFF-ROAD – FROM THE OUTSIDE

Despite trying my hand behind fast, slow, hybrid, sports, small and luxury cars I’d never had the desire to get down and dirty off-road. Until now. We were at the inaugural ‘African Ford Go Further ‘event – the first to be held in Africa and Day 2 was an off-road experience at the De Rust Ford Academy near Hartebeespoort Dam.

First we watched the almost illusionist demonstration of one of the instructors ascending a very steep hill with the Ranger – but on the outside, balanced on the runner– lightly touching the steering wheel to guide it.

Seems the Ranger is happy to go solo, with a little direction.

The Ranger might look all brawn (from the bulging bonnet to the deep grooves along the flanks) but there’s a brain, too.

It turned out that being a first-timer was far less daunting for me than my three male passengers. Thanks to the trainers. They explained the diff lock thingy so simply and sweetly (even the third time), the low-range gear and off-road 101 was on track. Theory over, we had a walk through the course and, for first-timers, the prep was as good as you can get.

The assurances that it was simple were, however, hard to believe.

The first hill was the most daunting. I may or may not have uttered an unladylike expletive but what happens on launch stays on the launch so no one will ever know. Did find shutting your eyes during moments of uncertainty (ask my passengers) as you ascend helps a great deal. It doesn’t really make much difference because you’re at such an upward angle, that you can’t see the terra firma ahead anyway… just the clouds.

Choosing a cloud as your point of reference can be tricky – particularly when they’re moving rapidly along in the jet stream. However, the eye candy instructor was on hand to direct me over the top with instructions such as “a little left” and “no!… other left…OTHER LEFT…!”

After that though, it became a bit of a breeze. We went through dongas, did three-point turns and at one point the slope was so steep (like pinball on tilt) that my passenger was higher than me and would have slid onto my lap if not for the seat belt.

Before you think I can now teach Chuck Norris to off-road, the relative ease has nothing to do with my skill but that of the Ranger. In fact, a little bit of power uphill, some brake feathering on the descent and some light guidance on the steering wheel and you more or less have 4×4’ing waxed.

Back for more? You bet. I’m amped, as they say, and mentally shopping for jerry cans, roof campers, camouflage skinny jeans and bully beef.

Oh yes, and the big hack didn’t scream like a girl. Not once. I had the feeling I’d passed muster but “what happens on ….” which means, of course, I’ll never know.

Girls, the only way you’re going to have such fun in the Highveld with leather under your derriere is if you get into a saddle and ride a horse.

Download the full article on the Ford Ranger review here.