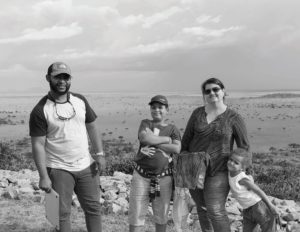 Nasikia Camps in Tanzania is a legacy of love, vision and authenticity. It is not only a living memorial to founder Naseeb Mfinanga, it is also a tribute to his widow, Donna, a brilliant businesswoman, entrepreneur and altruist.

Donna Duggan, an Australian nurse and midwife, visited Tanzania as a tourist three times before she returned in 2004 as a volunteer at various HIV clinics in Moshi, a little town at the foothills of Kilimanjaro in the Great Rift Valley. Tanzania is home to the Serengeti, which was declared a conservation area in 1959. The short, sweet grass after the rains makes it irresistible to herbivores and in turn providing a feast for predators. That is why the Serengeti – or “endless plains” in the language of the Maasai – is famous for its wildlife.

When donna first met Nas, he was selling leather shoes from his little shop. The attraction was instant. So was the idea of starting a feasible business together.

Nas and Donna soon became a couple, bound by a profound compatibility that easily lent itself to a business partnership.

In 2005, they founded Maasai Wanderings with a single, beat-up old Land Rover – dubbing it “The Buffalo”. The first guest trip was an overnight Maasai village experience followed by a three-day camping trip to Ngorogoro and the Serengeti.

The rest is a tale for the age, starring two charismatic entrepreneurs. It was the beginning of Maasai Wanderings, a Destination Management Company (DMC) which handles the logistics of travel.

In many respects, Nas and Donna couldn’t have been more different. Nas was the connector, quietly confident and with a relentless optimism. He was also a natural when it came to developing business relationships. This complemented Donna’s spirit and administrative skills. “I made sure the books balanced, the emails were answered and that the business ran like a well-oiled machine,” she says. It was this “can-do” attitude that also had Donna speaking fluent Swahili in no time.

The following year, Donna and Nas married, and their son, Rami, was born soon after. The union, despite being inter-faith and cross-cultural, was solid, built on shared dreams and passions and their love for each other. Although they had their fair share of ups and downs, the business went from strength to strength.

They soon realised that referring travellers to other camps was not going to grow their business, and so the first of the Nasikia Camps was opened in 2008. Nasikia means “I hear, I feel” in Swahili, and the dream was to create an authentic camping experience where guests could feel at one with the bush, while still being comfortable and pampered. The duo of luxury mobile camps were followed by the first permanent camps with en-suite bathrooms in 2015. There are now six camps, and it is testimony to their determination and passion that the entire business is self- funded.

Nas had always wanted to expand the business into the eastern Serengeti. He loved the open expanses. As soon as they got the go-ahead and the permit, they started building. Nas chose the site for Ehlane Plains in the Soit le Motonyi area which was previously closed for 22 years for cheetah conservation. He bought into the idea of minimum impact on the environment, which is monitored by very strict codes.

Tragedy struck before Nas could see Ehlane Plains finished. He was one of 11 people who died on 15 November 2017, when a Cessna aircraft crashed above the Ngorongoro Conservation Area in northern Tanzania. Ehlane Plains is a magnificent memorial to two people who had followed their dreams and persevered to find the ideal place to “see” and “hear” the bush.

No one would have blamed Donna for going back to Australia after losing her soulmate and with two children aged 5 and 11 to raise alone. In fact, it was expected by all those around her, including her staff. But this pioneering businesswomen had no intention of quitting what they had started. “There is a word in Swahili, kupambana, which means to keep struggling, hustling, with the goal of moving forward to be where we need to be,” she says. “I have people relying on me who need jobs. It’s all about empowering and multi-skilling and I had responsibilities to the staff. We’ve set up the Naseeb Mfinanga Memorial Trust to ensure my husband’s legacy continues and his spirit lives on. I know that he would never want me to give up the fight to reach our goals.”

And Donna hasn’t. The Ehlane Plains tented camp opened on time shortly after Nas’ death – a massive tribute to Donna and her team who were determined to continue. It is as though her husband’s legacy constructed a fortress of goodwill around her, and it’s clear that she is surrounded by a network of people who remain unflinchingly at her side.

“My team was worried, but we had a big meeting, and I said: ‘I’m not going anywhere. If I went anywhere, I’d let myself down, I’d let Nas down and I’d let you down. But I need you to help me; I can’t do it on my own.’ They were cheering, and said, ‘That’s what we want, Mama, that’s what we were waiting for!’ Their support keeps me going.

“I don’t know what we would have done without Charles Mwanisawa, the Nasikia Camps operations manager. He is a well-respected leader and pivotal to me in fulfilling Nas’ vision.”

Some 200 local people look to her for their jobs and livelihoods. They are employed by the companies, not only at the camp but in Arusha, where the tents are manufactured alongside an engineering, carpentry and design workshop. Unlike other tour operators and safari companies, Maasai Wanderings build their own furniture, tents and trimmings for their camps using local artisans. Their custom-made game-viewing vehicles are also put together here. The site is a hive of activity, and Donna interacts with the team in fluent Swahili. Their love and respect for her is evident.

You would have thought Donna would have slowed down in the year following her husband’s death. But the fact that two new camps were added to the portfolio recently – Tarangire Ndovu Camp opened in December, and Mandhari Lodge on the Escarpment opens next month – is testimony to her determination. And there is no sign of slowing down either. She also has two more locations under application.

If they are anything like Ehlane Camp, they will be magnificent. The camp is so unobtrusive and part of the bush that you don’t see it until you are almost upon. As the first guests at the new camp, it was a bitter- sweet moment to step through the door with Donna into the magnificent realisation of their dreams. 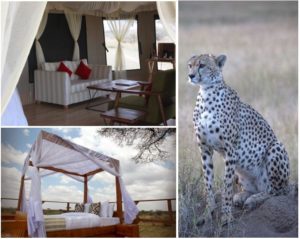 Ehlane Plains is a destination in itself. A day spent in the camp, enjoying the hospitality of the affable and gracious staff and the magnificent food, is a chance to absorb the African bush and just be still. That’s not to say the game drives aren’t magnificent.

You can spot a tripod of a giraffe eating wild cucumbers off the ground; a Marshall eagle with its deeply feathered legs and talons and a 2,5-m wingspan wrapped protectively around its prey.

A topi antelope with a striking reddish- brown to purplish-red, glossy coat poses on his pedestal – a termite mound. It’s not surprising the Maasai have dubbed this pose bugamina ( look at me!). At the river’s edge a large, smooth boulder of a hippo suddenly appears, beady eyed, and a leopard melts into the bush as the sun drops abruptly behind the horizon.

As the sun slips away, you know it is not the end of a day, but the start of a 12-hour night shift in the African bush. The bush is once again alive with the stirrings of nocturnal hunters, the vigilance of the prey and the cycle of life. It is the beauty of the Serengeti and Donna’s skill and passion as a businesswoman that keeps her going onward and upward, always striving to ensure guests “feel” and “hear”.

It’s not surprising that Donna’s staff affectionately call her Mama Simba (“mother lion”) When you see what Donna has achieved, it reminds you of the quote: “A strong woman understands that the gifts such as logic, decisiveness, and strength are just as feminine as intuition and emotional connection. She values and uses all of her gifts.”

Maasai Wanderings and Nasikia Tented Camps and Donna in her personal capacity support five primary schools and facilitate with partners to feed over 3 800 learners a day. A visit to one of the schools, Matim Primary School in Le Manyata, makes you realise that it is not just Nas’ legacy that will be left behind one day, it is Donna’s too. In addition, she is supporting 118 secondary school learners and four university students. Her programme has produced doctors, lawyers and accountants and learners are eternally grateful for the chance to be educated.

The principal of Matim, Mr Lang’o, says, “Since Donna started helping the school we have moved from 66th position in the National Grade Seven exams to 18th. There used to be six learners to one desk and now three. We have a library, a lunch programme, computers on which the teachers are being taught, more classrooms, garden clubs, netball and school uniforms.”

The learners’ commitment is astounding. Despite walking long distances, they arrive at 07h00 and the first hour of the day is spent cleaning the classroom and grounds. The school has nine classrooms for the just over 1,000 learners  still a tight fit but far better than it used to be.

Donna’s philanthropy, both at the schools and in the camps, is like a warm blanket of caring. It is not surprising that the locals refer to her affectionately as “mama”. If your legacy is how many hearts you have touched, then Donna’s legacy too will be huge.