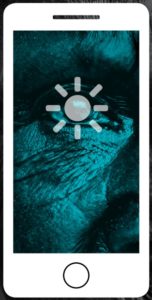 The story of a doctor’s mobile app that brings instant critical specialist advice to rural areas of South Africa.

In a makeshift weekend surgical clinic in De aar, two specialists  are  performing  cataract  surgeries.  They  have travelled there for the weekend as volunteers to operate on 40  patients.  The  focus  is  on  an  elderly  woman  sitting  in  a crowded room. As the nurse removes the dressing from her eye, the expression on her face is at once bewildered and in- credulous. For the first time in nearly a decade she can see. She is in tears. ‘For nine years I have been led around. nine years… now I can lead myself. thank you, doctor! thank you.’

It is moments such as these that drive specialist ophthalmologist Dr William Mapham. ‘my passion has been to make a difference and improve rural healthcare.’ When he was a first year medical student, the lecturer jokingly said that nothing good comes out of the Eastern Cape, and this flippant remark struck a nerve; Mapham – who grew up in the Eastern Cape – was determined to challenge misconceptions about the region. It became the impetus for him to make a difference.

Newly qualified in 2004, his first job as a ‘real doctor’ was at Madwaleni hospital near Qumbu in the eastern Cape. It was so isolated that the round trip to fill up with petrol was one-and-a-half hours – almost a self-defeating exercise.  The rutted road to work was more like an advanced 4×4 trail and the traffic, an occasional cow or sheep. He says the theme at this medical outpost was apt – a quote by Helen Keller: ‘Life  is a daring adventure or nothing at all.’

This is an existence that Mapham breathes and lives – not only in medicine but beyond too. Nine years ago, his life hung by a thread. While rock climbing with friends in the Eastern Cape, he slipped and found himself upside down and swinging against the cliff face, narrowly escaping decapitation.  The  near-death  experience affirmed his belief that he was here for a purpose and to make a difference.

He recalls another defining moment. ‘a patient came to Madwaleni with a badly infected eye. We had little in terms of specialised training but I knew it was serious. I wrote a referral letter to Mthatha hospital, encouraging him to go for specialist treatment urgently.’ seven years later, when Mapham was back volunteering at Madwaleni, the same man came to the hospital again. He had not taken the three-hour trip to Mthatha and was blind in that eye. ‘the biggest tragedy,’ says Mapham, ‘is that the hospital had the medication to treat him. Some specialist knowledge could have saved his sight. It was a very personal moment for me.’

It’s unsurprising that Mapham gravitated towards mobile health (mHealth) with his two passions being rural healthcare and technology. A computer wrangler with a medical specialist degree, he admits that at the age of eight, he wore out the family PC’s space bar playing Space Invaders. He also worked in the United States with mobile phone technology for health and with the communications team of the South African National AIDS Council. The pièce de résistance was qualifying as an ophthalmic specialist.

The idea for the Vula app (‘vula’ means ‘open’ in siSwati, Xhosa and Zulu) was conceived while he was working as a volunteer at the Vula Emehlo Eye Clinic in rural Swaziland. Once again, he experienced first-hand the difficulties rural health workers faced when they need specialist advice. He had trained under the supervision of Dr Jonathan Pons, a renowned ophthalmologist at the Good Shepherd Hospital in Swaziland, where thousands of sight-restoring surgeries have been performed since 1998. ‘He invited me to spend three months there to learn how to do cataract surgery but I was obviously a slow learner; 10 months later and I was still there – but proficient in cataract surgery.’

Ten months without a salary meant a spartan diet of mostly tinned pilchards and veggies from the garden. Like Mapham’s previous experiences had taught him though, everything happens for a reason, and he and Pons started running outreach clinics in the area. ‘Sometimes we drove up to four hours in a day to reach them. I realised the difficulty was twofold. It wasn’t so much the issue of rural healthcare not having access to specialists, it is the fact that there is only one specialist for every 18 000 people in South Africa who are in the public healthcare system. This as opposed to one for every 1 500 patients in the private sector. It also struck me that even in the outlying areas, most healthcare workers had access to modern, well-functioning smartphones.’

The app works because it doesn’t rely solely on mobile technology but on medical skills and experience in rural medicine too. There are 5 000 healthcare professionals currently on the system, 1 000 of whom are giving specialist advice. The app helps to streamline the diagnostic process: usage statistics show that it is used every five to six minutes and, at the time of writing, 57 525 patients have benefited from it.

Healthcare practitioners can send information, images and queries, and can see other patients while waiting for an answer – which usually doesn’t take long. ‘Doctors are competitive,’ says Mapham, smiling. ‘They compete for the quickest response time, which we share on the app.’

Nnamdi Oranye, author of Disrupting Africa: The Rise and Rise of African Innovation, believes that this sort of pioneering approach is key to addressing challenges in Africa. So Vula is a disruptor? Mapham feels it is a dangerous word to use in the context of health. He prefers the 14th-century quote of Saint Francis de Sales, the patron saint of writers: ‘when you encounter difficulties and contradictions, do not try to break them but bend them with the gentleness of time.’

‘Before Vula, the problem was referrals to a specialist in real time were slow. Health workers would use a fax, phone and later WhatsApp as a means of communication. Not only was it ponderous but it wasn’t secure or confidential,’ says Mapham, ‘and the reply often took hours.’ with specialists on Vula standby, there is no need to send patients away. They are referred or treated on the spot.’

Mapham says the app was developed from the ground, starting with ophthalmology as a prototype. At least 20 disciplines have been added since, ranging from neurology to burns. It was not an easy road. After developing a very basic app, he was delighted to receive a R50 000 donation from the Shuttleworth Foundation and dreamt of having it available on Android and iOS platforms and having a background server. That ambitious bubble burst when the developer told him that for that amount of money he could have one button and would he like red or blue… Development was funded largely by prize money for innovation and entrepreneurship. He received grants and awards including the Clearly Vision Prize, which is designed to find new ways to deliver eye care around the world. Like so many startups, Vula has been in constant danger of running out of money. Mapham is motivated, philanthropic, a lateral thinker and solution driven.

He tells the story of Elizma Anthonissen, a sister at Vredendal Hospital Eye Care Centre. She first used Vula in 2013 as a learning tool. After a post-grad course in nursing ophthalmology, she uses it to streamline the referral process. ‘Before Vula, we could sit all day waiting to get a response from a specialist. People got lost in the system and the result was often blindness. Vula is a game-changer for us and our patients.’ Mapham says that Anthonissen was the most frequent user of the app for two years. ‘Then she suddenly stopped. I phoned her to find out what had happened and, to my delight, was told she had trained “case  by case” and after securing investment from Japan, was able to open her own eye clinic.’

The word is out about Vula. Mapham says, ‘we have had letters from 17 countries, some of which are in Africa, asking for Vula. However, our resources are currently limited, so we will focus on South Africa until we raise more capital and have more human resources.’

Vula is doing, as our Arch says, ‘more than a little bit of good’, and Mapham says his vision is for every rural healthcare worker to have access to specialist advice. ‘In the future, I see a professional network for health workers using Vula across the globe.’