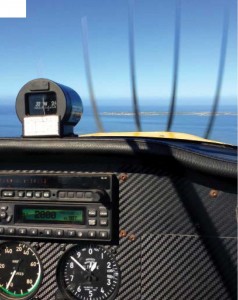 Blyth and Pitman may not have invented flight… but their brilliant partnership and revolutionary new Sling has reinvented the rules.

THE BRIEF: make a Light Sports Aircraft (LSA) that is beautiful, stable and responsive in the air. It must tick all the boxes for a purchase of the heart too. Designer Mike Blyth, who has been sketching aircraft since he could hold a pencil, created the Sling – and hit the G-spot for aircraft aficionados.

The Sling gave Mike Blyth and partner James Pitman the perfect ammunition to take on the Goliaths of international aircraft manufacturers. Their story reads like a case study out of Malcolm Gladwell’s latest book, David and Goliath: Underdogs, Misfits and the Art of Battling Giants. The nimble start-up company had the perfect credentials to create new solutions for old challenges. And their timing was spot on.

Other manufacturers were trying to jump the queue by cobbling designs from all over the world while keeping it under the 600kg limit for LSAs. Not Pitman and Blyth. With slow but perfect timetabling over four years, they created what esteemed Californian aviation journalist Dan Johnson described as ‘a brilliant product of careful engineering and a patient development schedule’.

Pitman, by his own admission, ‘made lots of money by fluke’. A lawyer with a BSc in physics, he joined a uranium company as a legal advisor with share options. When the company was sold, he made what he calls ‘a quick buck’. Fiscally secure, he went back to his passion for flying and got his Private Pilot’s Licence (PPL). Blyth, who was already involved in designing microlights, was looking for a backer at the time, so the pair took off in perfect formation to form the Airplane Factory.

‘Initially we were going to be the design house only, but soon started to manufacture. Start-up costs were huge and we had to import 90 percent of the components – including the 1 200cc Rotax engines – ourselves,’ explains Pitman.

The duo took four years to develop the prototype of what would become the Sling. They flew it for 20 hours and then started redesigning parts that were unsatisfactory. Their next developmental prototype reached the perfect control harmony of pitch, roll and yaw. And it turned out to have good looks too.

In 2009, Blyth and Pitman flew around the world via Oshkosh in the prototype Sling 2. Two years later, fellow pilot Jean d’Assonville joined them as they flew around the world in the opposite direction in their Sling 4 prototype. ‘In 2013, we flew our first production Sling 4 up the west coast of Africa, across the Atlantic to Canada and on to Oshkosh in Wisconsin – the site of the greatest airshow [the EAA AirVenture Oshkosh]. With more than a million visitors, it was the perfect spot to showcase an experimental aircraft.’

The return journey was from Osh up through Canada to Greenland, over the North Pole to Iceland, then England and down through Europe and once again the west coast of Africa. ‘The flight back was fantastic!’ says Pitman. ‘The plane went absolutely beautifully. We had a flat tyre in Morocco but apart from that not a single problem.

‘Oh yes,’ he says, ‘in Dakar the fuel was severely diluted – but she never skipped a beat. Absolutely brilliant!’

What started as a slightly wild adventure turned into a really brilliant marketing junket. The excitement and positive feedback around the Sling fuelled a full production on their return. With
just five employees, they created the first Sling for the market. Today, they have 120 staff and have sold 148 planes – and the local and international market are snapping them up.

A test flight and mini flying lesson in one of the many Slings at Morningstar airfield seems the perfect way to spend the day. The air is alive with small aircraft – gyros, gliders, microlights and, of course, our bright yellow Sling. Although not as convoluted as the soap opera of airspace above a busy commercial airport, the radios crackle continuously, exuberant chatter on the headsets. It’s all about routes, heights, directions, ‘Rogers’ and ‘Overs’. The love of flying is palpable through the twitter of good cheer coming through the headsets as the Sling takes to the skies.

Pilot Mark Bunning says, ‘There is no competition for the Sling.’ And it’s not spin doctoring or marketing hyperbole. ‘Sure you can get a cheaper plane, but for the Sling at just under R1 million, you get what you pay for.’ He goes into pilot speak, describing its ‘perfect balance between manoeuvrability, speed, comfort, safety and stability’. He says, ‘The Sling is larger, faster, safer,
more stable, forgiving and is manufactured out of aluminium for strength. The Sling 4 even has a ballistic parachute. In the unlikely event that the plane flies under 300km/h, the chute rockets out the Sling and floats down like a sycamore seed.’

The plane responds instantly to almost-imperceptible movements on the joystick, which was evident when this rookie Biggles took control. Initially the horizon kept appearing and reappearing as if the plane were in a particularly heavy swell, until just the right touch – as light as a butterfly alighting – finally settled the plane into what Bunning describes as ‘responsive but not skittish’.

If you are a do-it-yourself kind of guy, you can have the Sling delivered in kit form. Otherwise the factory in Jo’burg will build it for you. It’s a fantastic touring plane, hugely popular with flight training schools, and is also an excellent transition to building hours towards a commercial pilot’s licence.

So where can you go in your Sling? If you need to nip off to Jo’burg from Cape Town for a meeting, the Sling will get you there in about six hours at a cruising speed of 200km/h – and you can do it hundreds of times. The good news is that your Sling will give you over 400 000km before you need to replace the Rotax engine. Or, of course, you can go all the way around the world like Blyth and Pitman did…

After eventually settling to a steady pace and less undulating flight path, Bunning says I have control. We swoop, parabola and he obligingly dips the wing until it’s vertical to the beach below ‘to get a good shot’, even though the wide cockpit gives an excellent all-round view. Wilbur Wright was once quoted as saying, ‘Flying is a sensation of perfect peace mingled with excitement that strains every nerve – if you can imagine that.’ He was spot on. Time is suspended and, in this moment between the Earth and the stars, all is well in the world…