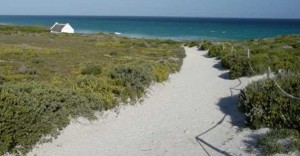 FORTY PERCENT of the global southern right whale population can’t be wrong. Each year from May to November they choose the bay that forms the boundary of De Hoop Nature Reserve to mate, calve and run their nurseries. You can see in excess of 600 of these magnificent creatures at a time as they undulate in the swell, their barnacle-encrusted heads appearing intermittently above the water, spy-hopping. Taking laid-back but resolute ownership of their ocean, they seem to be aware that they’re in paradise (the marine protected area extends 5km out to sea): it’s safe, food is plentiful, it’s an ideal stopover before heading back to Antarctica.

De Hoop, with its 55km of pristine Overberg coastline, cocoons various species, and visitors are soon caught up in the unspoiled ecosystem. The spoiling comes in the form of luxury offered by Melkkamer Manor House, a private sandstone house hidden among nature’s bizarre sculptures – the gnarled density of milkwood trees. Access from reception is either by a quick aquaplane across the water in a speedboat, or a scenic drive.

The gables follow a neo-Cape-Dutch style but there are hints of Edwardian and Art Nouveau features to the architecture. A thatch roof, teak, stained glass doors, a cast-iron tub and fireplaces tumble together to create the perfect rustic yet luxurious design. Restored to its former glory, the building offers four en-suite bedrooms, a farm kitchen and wraparound verandas. The generator is turned off at night and paraffin lamps are the only harmless flickering stamp on the environment.

On the veranda you can enjoy sundowners and canapes prepared by the private chef as you watch streaks of pink flamingo catching the last light or listen to the fish eagle’s ‘call of Africa’. If you’re lucky, you might spot the elusive Cape clawless otter digging with its dextrous fingers for eggs, frogs or crabs, or just playing sleekly in the water. Teeming with life, De Hoop Vlei is a highly productive ecosystem and Ramsar Site (rated of international ecological importance). The skies are no less busy – there are more than 290 species of birds in De Hoop. Then there are the bats. DH Lawrence’s poem comes to mind as the transition from afternoon to evening is seamlessly choreographed by the swallows like ‘spools of dark thread sewing the shadows together’ suddenly turn to bats, ‘an elastic shudder in flight – a black glove thrown up at the light with serrated wings against the sky’.

Rumour has it that the ghost of De Hoop also emerges at sunset. A young lady who choked on an oyster on her wedding night is purported to wander the reserve – harmless in a long white frock (but prone to hysterical laughter). We didn’t see the otters either.

The reserve is a magnificent outdoor classroom – a diversity of practical, aesthetic, watershed protection and spiritual inspiration. The baboons were no exception. Presided over by resident baboon whisperer Tony Phelps, they seem so content that you expect them to start a chorus of ‘Don’t worry, be happy’ as they gather to groom and, lizard-like, absorb the sun’s winter rays.

A rare privilege was to walk among them with Phelps, in the hope of observing their bedtime routine. Perhaps as a concession to Women’s Month, all the grooming was the males’ domain. More likely it was because the females were in oestrus – they strut their stuff and show off their charms (which resemble large undissected pink brains attached to their rear ends). Phelps spends hours with them each day, recording their activity cycles for The University of Lethbridge in Canada. The primates are so used to him by now that they ignore him.

Finally we sit at the entrance to their underground cave – they are the only recorded troop to live underground. The tussling, chattering group slips the 7m into their limestone home like prep learners into their dorm. Mothers with babies, like Lilliputian jockeys, disappear into the darkness. They are jovial, relaxed, at peace.

The first private/public partnership in the hospitality industry in the Western Cape (between De Hoop Collection and Cape Nature), the reserve offers an opportunity to reflect on and, by gentle osmosis, absorb the harmony.