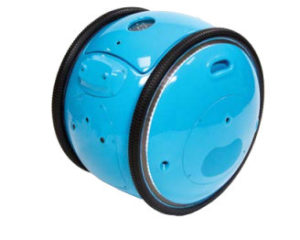 Whether travelling to Helsinki or the hereafter, it seems gadgetry (and some educated guess work) is set to change our lives.

Piaggio, the Italian company behind the Vespa scooter, has introduced Gita, a ‘cargo droid’ or (if your teens and the lingo are a distant memory) a mobile carrier-slash-suitcase. Once little Gita is powered up, it follows you around carrying your stuff. Gita means ‘jaunt’ or ‘travel’ in Italian and this AI porter will certainly give you freedom of movement and – joy – hands-free shopping.

Gita has large wheels like a bicycle, so it can operate on irregular surfaces, indoors and outdoors, and on pavements and streets. It is 66 centimetres tall, weighs around 19 kilo- grams and can carry about its body weight in goodies. Produced under Piaggio’s new Fast Forward division, this autonomous miniature vehicle for luggage has also been described as a ‘bulbous lozenge of a robot’ (The Atlantic). We think of it more as a toddler cyber-tied to its mother with invisible apron strings. Except, of course, you’re unlikely to have a chocolate tantrum in the checkout line.

The rotund little vessel goes on quick shopping trips with  its human, reaching speeds of up to 35km/h. Piaggio Fast Forward shies away from calling Gita a ‘robot’ but it does automatically follow its owner (and comes in red, yellow and green). Whatever its description, Gita is off the scale in terms of cuteness and although it’s said to be great for travelling, we suspect it may have separation anxiety in the hold and would cause chaos when it comes to security announcements.

Gita made the shortlist for the 10th annual Beazley Designs of the Year in 2017, which spotlights the best innovations the world has to offer, be it architecture, pioneering recycling ideas or, in this case (excuse the pun), visionary luggage solutions.

Google has used 46 billion data points to predict the prognosis of hospital patients. The AI is becoming the Nostradamus of a patient outcomes, predicting readmissions, final diagnosis and – darkly – mortality.

Compared to traditional models, it can predict patient deaths 24 to 28 hours before current methods, so doctors can administer life-saving procedures. The biggest challenge according to researchers is, unsurprisingly, deciphering doctors’ handwriting – even AI can’t read the scribbles.

The system analysed over 200 000 patients at two US hospitals, identifying words and events associated with certain outcomes, and learnt how to exclude extraneous data. Although it’s still early days, if this type of AI was implemented at hospitals, it could help them apply their resources more efficiently and increase the number of lives they could save.

So if you’re the type that sneaks a look at your gifts under the tree before Christmas morning, you might like to know the prediction when you are admitted – but a gentle caveat: while it’s been shown to be able to predict the likelihood of death with 95 percent accuracy, beware the five percent false positives.

A small startup in Ukraine has developed smart blinds – that’s right, smarter than merely blocking out the light. The sun-powered blinds are purported to last 25 years – and they work hard. According to the company, SolarGaps, a square metre of blind can produce 100 watt-hours of electricity per day when mounted outside the window.  That could power three MacBooks and 30 LED light bulbs.

Why not just solar on the rooftop as so many homes do already? Just think of the billions of people who can’t harness solar power because they live in an apartment with no roof access. They all have windows though…

If you’re worried there’s some PT involved, don’t be. The blinds include a motor that can either be set to open and close the blinds manually or automatically, and… wait for it… adjust the angle with an automatic tracking mechanism to get the maximum benefit from the sun’s position during the day. As SolarGaps says, ‘The blinds open your window to green energy.’