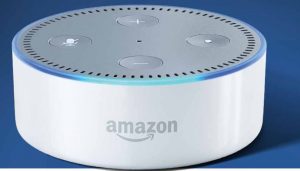 Artificial intelligence (AI) promises to change our lives in a multitude of ways, from driving our cars to diagnosing disease before doctors can spot it. AI is already in our homes And promises to get exponentially more intelligent.

Meet  ALEXA:  smart,  of  indeterminate   age,   speaks a sultry Queen’s English, has a sense of humour, gives  you the silent treatment occasionally  and  can  tell  you  the square root of 297 504. Instantly. She’s cloud-based, sassy  and covetable.

So who is she? She’s an intelligent virtual personal assistant, a combination of a smart home controller-cum- internet assistant and life concierge, brought to you via  Amazon voice activation. echo, the wireless   speaker, is the conduit to chat to her. If you’re a  technophobe  and  even  downloading  an  app is  challenging,  then  ALEXA –  named  after  the  ancient  library  of  Alexandria  –  is for  you.  (Despite  Amazon’s  assurance that  the  setup  is  simple,  the  caveat  is this:  find  the  nearest  adolescent  to do it.) Once set up, the voice control system means simply uttering your wishes to   have  them fulfilled – within reason, of course.  ALEXA is not only a mine of useful and sometimes not-so-useful information but you can also play music, add to your to-do list, listen to the news, find out what the weather is doing, dim your lights and search for    recipes.

ALEXA is particularly advantageous for smart home users because she lets you control your connected devices without having to take out your phone and launch an app. (Of course, ALEXA does have an app but that’s mostly for setup and configuration, or to add new abilities or sequences of commands – called ‘skills’ – or to view to-do and shopping lists.) As long as you preface your request with ‘ALEXA’, ‘echo’, ‘Amazon’ or ‘Computer’, she needs no activation and, because of the highly sensitive micro- phones, can respond anywhere within earshot. Once you say the magic word, the microphone takes everything you say and beams it up, Scotty-like, to Amazon’s cloud computers for analysis.

Apparently, ‘once you get used to the quirks’, using ALEXA feels  much  more  natural  and responsive than speaking to  a  phone-based voice assistant like Apple’s Siri. Scary, but nice. It’s hard to believe she’s not human when you tell her to chill or ask if she is feeding your  information  to the  government  and  she  shuts down.

ALEXA, like all 21st-century women, has her threshold. She won’t answer if you don’t preface the request with her name. And sometimes you aren’t sure if her answer is    tongue-in-cheek or not…

ALEXA, surely you can’t be serious?

I am serious. And don’t call me  Shirley.

Her moral limits are also reached when she’s asked where to bury a body? As any law-abiding citizen would answer, she says, ‘Call the police.’ In the same vein, she won’t tell you how to make a bomb  either.

According to your level of tech know-how (or  the  resident  teenager’s),  ALEXA can  perform  more advanced tasks. She can start the vacuum cleaner if yours is robotic and linked, warm up your car while you finish your coffee, send text messages and – a personal best – find your keys in the house.

Despite being of the correct gender to fit the stereotype, ALEXA can’t multitask and needs to be asked one question at a time. Usually not an issue, except if you have a long shopping list you are dictating and she needs each item requested separately. She can identify a song, if you give her just a short sample of the lyrics, tune into radio stations and knows a few (bad) jokes. As smart as the system is, these get no more sophisticated than, ‘Why should you invite a mushroom to your party? Because he’s a fun guy.’ But it’s the smart home talents that have many people excited about ALEXA. One of the key characteristics of a smart device is that it  should make common daily tasks easier. Turning off your lights or adjusting the air-con   with an app on your iPhone might seem high   tech, but it’s simply moving the switch from your wall to your phone. Completing the same task by speaking your command while your phone sits in your pocket is even easier.

ALEXA has been asked just about everything and she almost always has an answer – with a little of her quirkiness on the side. Here’s a taste of your relationship to come:

ALEXA, are you ready?

I was born ready. Or at least, very well prepared. Let’s do it.

ALEXA, what do you want to be when you grow  up?

I want to be the computer from Star trek.

I’m better at telling jokes than responding to them. Just know that I’m laughing on the inside. With you, not at  you.

ALEXA, what makes you   happy?

ALEXA, can you give me some money?

ALEXA, where are my  keys?

Try under the couch.

The one thing that may keep her silent in South Africa is our erratic broadband. Toby Shapshak, publisher of  Stuff magazine, says, ‘Many of the   services and apps in South Africa require a decent broadband connection and a reduced data cost. If that comes down, people will start to use [them] more  because it costs them less.