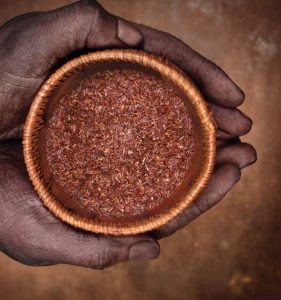 Rooibos enjoys an international reputation as a soothing, healthy drink with a bonus point as a beauty elixir. But it appears that the extract from the green leaves may also be a beneficial biological  weapon.

Although it has been well established that Rooibos is rich in antioxidants and reduces oxidative stress (Khoisan people have used Rooibos medicinally for hundreds of years), Professor Wentzel Gelderblom of Cape Peninsula university of technology’s institute of biomedical and Microbial biotechnology says the research on Rooibos extract’s ability to remove precancerous cells in the skin should be considered a breakthrough.

For the past 11 years, scientists from the south African Medical Research Council and Cape Peninsula university of technology have been involved in studying how Rooibos can prevent skin cancer by protecting against inflammation in skin cells, since chronic inflammation is one of the hallmarks of skin-cancer development. the scientists have discovered that an extract of Rooibos tea is unique in that it can remove UVB – damaged cells, delaying or preventing their progression into a tumour. it does so by stopping the multiplication of cancerous cells and removing these by prompting them to ‘commit suicide’ – a process that is scientifically referred to as ‘programmed cell death’. Gelderblom points out that the extract works on basal- and squamous-cell carcinoma, and not on melanoma.

So what makes Rooibos unique?

Most of us have heard of flavonoids, the ‘good cops’ found naturally in a variety of fruit and vegetables thought to provide health benefits through antioxidant effects. According to Gelderblom, it is the flavonoid aspalathin, found in high quantities in green Rooibos leaves, that is important. it is thought to help protect the plant against oxidative stress and the harsh environment.

Scientists have been working with unfermented Rooibos and an empirical form of ‘reading the tea leaves’ has revealed that it can also undo some of the damage caused by the sun’s harmful rays. Gelderblom, one of the lead researchers in the study, says, ‘once the skin has been exposed to the sun’s ultraviolet (UV) rays, Rooibos extracts have the ability to remove precancerous damaged cells, thereby blocking the onset of chronic inflammation.’

harvard Medical school quotes Dr Andrew luster of the Centre for Immunology and Inflammatory Diseases at Harvard-affiliated Massachusetts General Hospital: ‘Inflammation is like a fire in your body you cannot see or feel. it’s a smouldering process that injures your body, and you often do not notice it until significant damage is done. However, inflammation is not evil per se. It is chronic inflammation, where the flame persists. This is a process where white blood cells flood the problem area and end up attacking nearby healthy tissues and organs as well as the area of injury.’ Such inflammation causes cell damage and DNA mutations, and not only skin cancer but also other cancers.

After sun damage, it is normal for skin cells to go into apoptosis or programmed cell death to remove damaged cells. Rooibos extract would accelerate this to ensure the removal of potentially mutating cells that may only manifest themselves as skin cancer 20 or 30 years later. Just like chemotherapy, it results in induced apoptosis or controlled cell deletion – the major difference being that in chemo healthy cells are damaged as well. in this scenario, it would appear that the rooibos flavonoids turned out to act as pro-oxidants. they increase oxidative stress in the cell and programme it to commit suicide, destroying the molecules that causes inflammation. They also remove DnA-damaged cells, which is another key determinant for cancer development.

So can we expect a miracle aftersun cream in the near future? Gelderblom says, ‘We are in a new phase of developing biomarkers – that is, an objectively measured and evaluated response to a therapeutic intervention. Very importantly, we must ascertain the correct quantity of extract needed for efficacy for the most specific dose- responsive effects. Lab trials and then clinical trials will follow.’ he recommends that using an aftersun skincare product containing Rooibos extract, as based on the findings of the current studies, could be beneficial. He warns, however, that care should be exercised, as these products should be validated first before any health claims can be made.