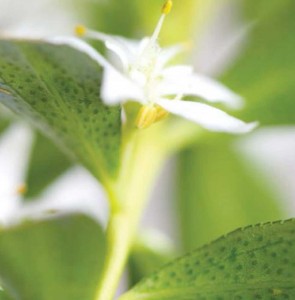 Buchu, which grows naturally only in the Western Cape, has revealed a remarkable little molecule that could be the answer to the world’s latest threat – superbug infections.

THE HEALING PROPERTIES of buchu are not news. The Khoisan people have been using it for hundreds of years for a range of ailments. In the 1700s it was introduced to the European settlers as a natural anti-inflammatory and an aid to longevity. A thimbleful of buchu extract called the ‘Noble’s tea’ was good enough a trade for a sheep. Not surprisingly. The buchu herb takes about five years to grow from a seedling until it’s ready to undergo the extraction process, which only yields 1,5% of this precious essence.

Since 1999, immunologist Professor Patrick Bouic together with a team of scientists has worked on the isolation of a single molecule from the Agathosma betulina plant. Although you’re not likely to see the final product on the pharmacy shelves immediately, it is considered a medical breakthrough.

‘Buchu’s anti-inflammatory properties have long been known,’ Bouic says, ‘and it is a medical fact that most diseases and conditions stem from or are the result of inflammation. It is on this basis that the development of the possible alternative to antibiotics, particularly those that have developed resistance, is critical.’

In vitro studies have determined that the buchu molecule can kill antibiotic-resistant bacteria. Buchu water was also tested on battery chickens on a farm in Klapmuts. Farmers regularly lose up to 30% of their flocks in the last few weeks of their growth because of infection. When the chickens’ water was laced with buchu, there was a 50% decrease in infection and deaths.

The results are promising. Years of research in collaboration with the department of chemistry at Stellenbosch University have led to the identification of the structure of the molecule, and the classification and isolation of the active complex – the DNA of this ‘traditional healer’ molecule. What is startling about the molecule is it is not related to any other known molecule…

Bouic says, ‘We are busy isolating sufficient quantities of the active molecule in order to do in-depth analyses of its chemical structure and to determine whether it could be synthesised in the long term. Once we know this, we can then do further research to see whether it is active against all bacterial strains, how much would be needed for clinical efficacy and so on. What we know at present is that it appears to be very different to other antibiotics in many aspects.’

The molecule isolated from buchu thinks ‘out of the box’ as it uses a completely different modus operandi when it comes to ‘outsmarting’ even the most obdurate bacteria. How does it do this? Bouic is not telling. All he is prepared to say is that the exact mechanism is unclear, that the molecule has not been encountered before, is helix-like and folds in upon itself to fortify the attack.

‘We are at the fractionation stage, which will be followed by the synthesis. Only then can the clinical studies begin.’ The development of a drug can take up to 20 years but with 2016 here, the finish line should not be too far off. The excitement over this development can only be understood if one looks at the problem of antibiotic-resistant or superbug infections in the world. The World Health Organization has already warned that superbugs resistant to antibiotics are set to become the new epidemic.

‘Misuse of antibiotics is the biggest culprit,’ says Bouic. ‘Our natural antibodies will fight the infection in most cases naturally by the bacterium being engulfed by special immune cells. But we are impatient and immediately go on antibiotics.’ He also says the ‘hygiene hypothesis’ is becoming more and more evident – if we all got a little grubbier, our immune systems would be tougher. ‘Unless the body is battling severe infection such as septicaemi,’ he adds. ‘In that case we cannot sit and wait for the immune system to kick in.’

‘The low-hanging fruit have already been picked,’ Bouic explains. ‘The more complex discovery and development are expensive and more time consuming. It’s also about the bottom line. Antibiotics have a poor return relative to investment. Why spend millions of dollars on a tablet that is for acute use (short¬term) therapy when you could be developing, for example, a blood pressure tablet that needs to be used for the rest of the person’s life?’
It makes sense but does not address the exponential growth and associated problems of the superbug invasion. Which is why the molecule with no name brings hope.