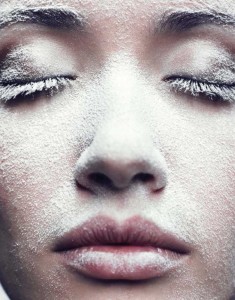 There has to be a fairly compelling reason to subject your body to temperatures ranging between -120°C and -160°C with liquid nitrogen vapour. Several in fact.

THE TREATMENT IS CALLED Whole Body Cryotherapy (WBC) and your therapy consists of exposing your body to temperatures below the coldest natural temperatures ever recorded on earth – a process which your body unsurprisingly interprets as a reason to panic. This damage control is in the form of a series of physiological processes which give your body the equivalent of a facelift – reason enough?

The question is how? Your body compensates for the extreme cold by creating heat from within. it does so by radically speeding up cellular metabolism, which in return speeds up recovery. in fact, studies suggest that injury recovery time can be boosted by up to 50 percent.

What happens in the 180 seconds of the treatment? According to Polish medical device manufacturer Edmund Kielbasa, whose company Metrum Cryoflex specialises in a range of cryotherapies, ‘Your body stresses. The temperature receptors in the skin send an SOS to the hypothalamus in the brain, which responds rather desperately to restore balance.’

Immediately the blood flow is diverted to your core, protecting your vital organs, and your periphery blood vessels constrict. This threat to the core of your body and the important flight-or-fight response means you have a rush of the hormone adrenaline, the neurotransmitter noradrenalin (both of which stimulate blood and lymph flow), and the natural anti-inflammatory cortisone. Add to this beta-endorphins (the body’s natural ‘happy drug’,
which have a greater painkilling potency than morphine) and an increase in cytokines, which are small proteins with a powerful anti-inflammatory and painkilling response, and it is a cocktail of the finest ingredients.

Once you start warming up after the treatment, there is a tsunami of blood flow to the rest of your body – in fact, your superficial blood vessels bound back and more – to up to four times their usual size – carrying bulk orders of natural healing substances. This is great for areas that often lack proper blood flow like joints and cartilage.

Cryotherapy is not new. The process was invented in 1978 by a Japanese doctor, Toshima Yamauchi, but was restricted to localised treatment of inflammation and rheumatoid arthritis. It is only in the last decade that the science has been further developed in Europe and the United States and is very popular for sports enhancement and recovery. Just ask the Nike running team, a number of international soccer teams, the US Olympic team and Daniel Craig, who purportedly whipped himself into fighting shape with WBC for the Bond movie Skyfall. Christiano Ronaldo reportedly chills out at home in his own CryoSauna.

Closer to home, CryoLiving in Cape Town is the first company in South Africa to offer whole body cryotherapy treatment (WBCT) as well as localised cryotherapy. Founder Eugene Pienaar discovered WBCT while searching for a drug-free treatment for his own condition – intractable insomnia. At the same time as taking chronic medication, he was struggling to recover after exercising, and suffered from fatigue, inflammation and tender muscles and joints. Medical professionals could not help, so when he heard about WBCT he set up his own practice, placing himself first in the queue for the treatment.

Reassuringly, if you plan to go for the treatment, there is a doctor on standby. In this case Dr Kim Prescott, who takes a detailed medical history to ensure your health will not be compromised by treatment. Then it’s into the chamber. it is not a glamorous process; it’s one which would have the fashion police whipping out their badges. You don a swimming costume (bring your own), very thick knee-high socks, Crocs and a pair of industrial strength mittens to prevent frostbite. Once kitted up, you step, rather ironically, into a chamber called a CryoSauna. Your head is reassuringly free though, allowing you to speak to the operator as well as breathe natural air.

The most notable difference between this extreme cold and, for example, an ice bath is that there is no sudden shock because it is a dry cold. Not the kind that makes you shiver and turn blue – it’s more a case of going from body temperature to icy numb in less than a minute, which is why you are encouraged to turn round in circles during the three minutes, to keep circulation and distribute the cold vapour evenly. It is also a distraction from the temperature, which is l6o°C colder than an ice bath.

The verdict? It’s not unpleasant but there is a point (which varies from person to person) when you can’t stay in another second. You don’t have to. The treatment ranges from as little as 30 seconds to the maximum of three minutes and you can throw in the towel at any stage. Once out, two minutes on an exercise bicycle gets your heart pumping and your body temperature up, and physical and mental euphoria sets in.

Such is the feeling of wellbeing that your head, which missed the treatment, develops serious FOMO. This is when a cryofacial comes in. A handheld pressured liquid nitrogen vapour is sprayed directly onto your face, neck and head, which stimulates collagen production while reducing pore size. Over time, skin becomes more elastic due to the increase in collagen, creating an anti­ageing effect.

WBCT may be indicated for reducing inflammation, promoting recovery and performance, an increase in testosterone, joint and muscle pain relief, anti-ageing and, more recently, as a treatment for depression but you’re not thinking about anything physiological as you dress, warm up and emerge from the treatment. Exhilarated and euphoric, you swear you will do it again. Soon. That night you sleep like the dead.

But as the commercials promise, that’s not all. Each treatment blitzes between 500 and 800 calories. And what’s not to like about losing weight without so much as raising a sweat?