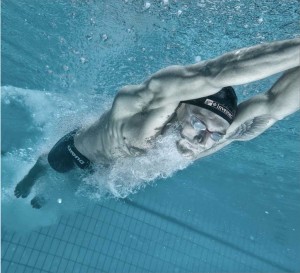 Olympian swimmer Cameron van der Burgh seems to have found the celebrity sportsman’s sweet spot; he is a savvy athlete who knows the art of a long-distance career.

Who are we to argue? Certainly not with a man who won a gold medal in the loom breaststroke at the 2012 Summer Olympics and, since then, a substantial cluster of world championship titles.

He remains laser-focused and trains six and a half hours a day. This includes a 5km swim mornings and afternoons, plus strength training and stretching routines. Sunday, his ‘day of rest’, is usually single-track mountain biking with mates. In ‘downtime’, he plays the stock market: commodities, futures, EPS and PE ratios roll off his tongue as he chats over lunch, and between training sessions he keeps his eye on the top 40 stocks as closely as the swimmer one step down on the podium from him.

Cameron says he finds the sessions in the pool ‘relaxing’. ‘I can plan my day, think about what needs to be done and generally gather my thoughts.’ Between his financial future and keeping up fitness levels, he also manages the perfect metrosexual look – enough to earn him the title of SA Style Icon in 2012.

How he got this far is impressive, given a slightly unpromising start to his academic path. There are dozens of examples of children who were diagnosed as hyperactive and became super successful, starting Fortune 500 companies, earning top credits in movies and winning the Super Bowl. At age 10, Cameron found himself in a near-catatonic state after taking Ritalin. It resulted in his diving into sport as an alternative to the drug. He arrived home one day with a note from the swimming teacher saying that she felt Cameron was talented – with no coaching he had shone in the school gala.

But innate talent alone doesn’t get you gold. According to his mother, Bev van der Burgh, ‘it is years of steely determination, single-minded focus and unwavering dedication that have brought him to the top of his stroke.’ Ironically, considering his ADD diagnosis at a young age, she credits his achievements to this singular kind of focus.

Cameron is Africa’s first ‘home-trained’ world record holder, and his list of achievements reads like the Who’s Who of aqua heroes. He has won numerous World Championships since his debut in 2007 when he took bronze. He broke his first world record at the age of 20 and represented South Africa at the 2008 and 2012 Summer Olympics. In 2013, he was voted Sportsman of the Year, having won the overall FINA Swimming World Cup in both 2008 and 2009. His most recent achievement, in August 2015, was a silver medal in the 100m breaststroke at the Fina World Championships in Kazan, Russia.

When a swimmer of this calibre asks you casually to swim a few laps with him in the Tuks (University of Pretoria) pool, you look first at your legs (swizzle sticks), calculate the odds of keeping up when you’re a foot shorter and an unmentionable number of years older, and say, ‘What the hell…’ The purportedly ‘very slow session’ did not prevent me from seeing little of the 27-year-old swimmer after the first millisecond. Cameron has been likened to the Gulf Stream – powerful, warm and swift – and in hindsight, observing the Gulf Stream is infinitely better than keeping up with it. You throw in the towel gratefully – and gracefully – but still hyped by the experience.

Time measures speed, but podium places are measured by will and mental strength – and serious coaching. ‘Home-grown’ in swim terms means Cameron did not have the benefits of training in America like many of South Africa’s swimming icons. Cameron’s coach, Dirk Lange, is based in Germany. Lange Skypes and emails training programmes, which are overseen by a local South African coach.

No super-coach, no champion. Cameron says a good coach must understand the swimmer: how much to push, when to be soft. He must know the balance, being both an authoritative figure and your friend – somewhere between an older brother and a father. Someone who knows how to coach smart.

The training room is not a pretty place – a mini London dungeon where the smell of testosterone and perspiration tells of hundreds of hours of hard workouts. Naat is a man of few words, contrasting strongly with Cameron’s banter with training partner Giulio Zorzi during the session… but, under his guidance, Cameron is soon doing the ‘power Clean’. This is an innocuous- sounding name for lifting 90kg and 120kg weights – repeatedly. It’s not enough to lift the equivalent of Schalk Burger over and over, but the velocity and power is measured as well. ‘It’s power performance too,’ says Naat.

Inevitably, one must ask about future goals. Another Olympics? ‘In fact, two,’ says Cameron. First the Summer Olympics in Rio in 2016, and then again in 2020. Two more Olympics makes Cameron 31 in 2020. ‘Longevity in swimmers means earning enough to carry on,’ he says. He has caught the attention of high-profile brands and signed several lucrative endorsement deals since the 2012 London Olympics. These include Arena, Investec, Audi, USN and TAG Heuer, with his most recent being a four-year deal with multi-brand corporation Procter & Gamble as the new Head and Shoulders ambassador, joining the likes of Michael Phelps, Lionel Messi and Jenson Button. Investec has backed their winner with a four-year sponsorship as he sets his sights on the 2016 Summer Olympics.

Cameron is the right breed of world athlete – driven, successful, smart, savvy, engaging and humble. In the wake of world champions who have forgotten that critical formula, he takes top position on the podium.