PLUG IN THESE COORDINATES: S24.09.19 E028.24.06. Or follow directions that take you north, far from people, light and noise. route markers include making note of ‘Mpatamacha game pens’, green signs and caution over gravel, security points and forks in the road. It’s an adventure just getting there. ‘There’ is the Waterberg and a remarkable property: the Leobo Private Reserve.

In 2012, British IT millionaire, Rory Sweet and his wife, Liz, chose the 4800 ha estate to build the Leobo Lodge and The Observatory overlooking the Palala Valley in Limpopo. It’s a remarkable stone- and-glass house with lustrous copper features, the most outstanding of which is the huge electrically operated dome housing the astrological observatory. The living area, the deck with its heated infinity pool, and bedroom suites with floor to ceiling glass translate to uninterrupted views of the plains. All the furnishings have been custom-made, including the huge hippo skeleton chandelier over the dining room table. A mezzanine level with tumbles of large, soft cushions is the entertainment area for television or games. Designed by award-winning architects Silvio Rech and Lesley Carstens, the lodge is part-Africa but mostly the bone, earth and stone marvels that have made the design duo world famous.

The touches are quirky and unexpected and, by all accounts, an extension of Sweet’s charming eccentricities – such as the rack of silver lame spacesuits designed by local fashion designer Joel Janse van Vuuren. It’s a witty reference to the lodge’s claim to fame, The Observatory. You’ve travelled far and away from light pollution and you’re only a two-storey climb up a wrought-iron staircase from seeing a night sky so beautiful your spirit soars.

The Observatory is home to a massive PlaneWave CDK20S telescope. From here, the planets are there to touch and the Milky Way becomes a fascinating collection of galaxies, not a hazy smudge in the sky.

If the universe is yours by night, a day here is no less captivating. The name ‘Leobo’ means chameleon in Northern Sotho and the reserve is your playground where you can adapt your day at a whim, like this enchanting creature changes its hue. Leobo urges you to be adventurous. You only have to ride a quad bike once to know why dogs have that beatific expression on their faces when they stick their heads out of an open car window. Exhilaration aside, quad biking through a private game reserve allows you to be more engaged with the game and, yes, adds a notch of adrenalin when you spot giraffe, buffalo, gemsbok, hippo and a variety of small antelopes. You also drive by two beautiful, hand-reared male cheetahs, Duma and Demetrius, who wander in a protected hectare enclosure, and you’re encouraged to interact with them. Even though the name Duma means ‘roaring of a car’, his vibrating purr is more like a diesel tractor. It’s hard to believe these creatures can race from 0 to l00km/h in three seconds – faster than any German-manufactured car.

If that isn’t enough, you can move from terra firma to the game ­viewing helicopter for an aerial view of the vast estate. This chopper is also used for shooting tick repellent via a paintball gun onto the game – a much less painful method than darting them, according to a vet.

The only other shooting allowed on the reserve is with a camera or on the shooting range where a Winchester sniper gun (.243) is set up for target practice. 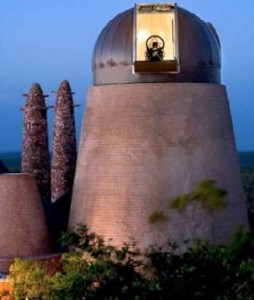 An action-packed day can easily be gentled down with a glass of bubbly in the Jacuzzi on the raised deck. As you sit in the warm, effervescent water, the sun slides off the edge of the bushveld. The only sounds are those of the distant mimic of deep-bellied mirth by the hippos, which gave rise to the name ‘laughing hippos’ and the intermittent laid-back ‘ribbit, ribbit’ of the frogs.

Above, the sky readies itself for another ‘Greatest Show on Earth’.

Leobo Private Reserve is only rented on an exclusive basis. Guests can book The Observatory, which accommodates nine people (six adults and three children) for R35 000 per night. All gourmet meals and drinks are included.

The eight-cottage Leobo Lodge can also be booked on an exclusive basis. It’s on the reserve, but away from The Observatory. It accommodates 18 people for R22 000 per night (based on eight adults, and R2 750 per additional adult per night beyond that), all inclusive.

For more information, go to www.Leoboprivatereserve.com, phone 082 782 7046 or email reservations@fish-i.co.za.